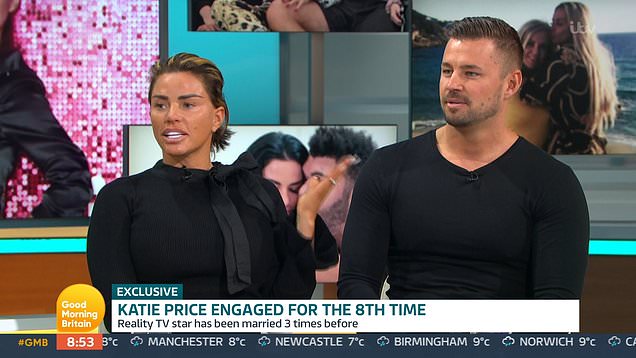 Katie Price has hit back at criticism of her eighth engagement after boyfriend Carl Woods proposed last month.

The My Crazy Life star announced that she was set to marry ex Love Island star Carl after around 10 months of dating.

Katie, 42, has been engaged seven times before and married three times, with ex-husbands including Peter Andre and Kieran Hayler.

However, the former glamour model insists Carl is the one and says she was in a completely different place in life with her previous relationships.

Defending her latest engagement, Katie told Susanna Reid and Adil Ray on Good Morning Britain: ‘It will be completely different. My dress will be different, I will look different and my mind is different.

‘I know so many people out there are like, “Oh yeah, we’ve heard this before”. Yeah, because I’ve rushed into things so much, made wrong choices but my head wasn’t right. My head is so right now, I’m a different person.’

When asked how public the couple will make their marriage, Carl, 31, weighed in: ‘You cannot avoid it with this lady.’

Susanna interjected to note that the pair were doing a public interview on national TV, but Carl continued on with his original point: ‘Has not everyone in this country said the same things about previous partners when they’re with their current one? Everybody does that.

‘When you’re in that relationship at the time everyone says all of those things.’

Katie added: ‘He’s been engaged and that before but because he’s not in the public eye no one sees it. We’ve all got pasts.’

Carl also described their relationship as ‘intense’ but said they ‘don’t argue’.

‘Before this I swore blind I would never date a woman with kids and I ended up with five,’ Carl added referring to Katie’s five children from past relationships; Harvey, 18, Junior, 15, Princess, 13, Jett, seven, and Bunny, six.

During their first TV interview since the engagement, Carl revealed that he actually met Katie’s daughter Princess at the same time as meeting his wife-to-be.

He had ‘badgered’ his restauranteur friend to introduce him to Katie after once spotting her at the eatery but missing his chance to speak to her.

Katie credited her stint at The Priory clinic in early 2020 with changing her life and admits her relationship with Carl ‘wouldn’t have worked’ if she met him years before.

‘Before I was in the Priory, everything just got to me and I wasn’t myself. I was in a bad way, I knew I had to get help mentally.

‘It literally changed my life, I came out a different person like I was 10 years ago.’

The couple revealed their plans to marry later this year so that Katie’s mother Amy, who has a terminal illness, will be able to see her walk down the aisle.