The Tonight Show Starring Jimmy Fallon is having its best ratings run in over a year – suggesting that things are looking up for the NBC show in a post-Trump universe. The show is on an eight-week run of leading in the 18-49 demo, including a tie for the week commencing March 15, Fallon’s best winning streak since early 2020. Welcome to the demo wars.

Co-showrunners Jamie Granet-Bederman and Nedaa Sweiss told Deadline that they’re pleased with how the show is currently performing.

“We’re happy. We’ve all been working really hard and it’s nice to see that hard work pay off. We’re putting our best foot forward and putting on good TV and if you’re making something that you’re passionate about – and really love – people can see that,” Granet-Bederman said. “They can see that we’re doing our best to create fun moments and hit the right energy in terms of what’s going on in the world.”

The Tonight Show has had a tough four years in the ratings with The Late Show with Stephen Colbert dominating during Trump’s presidency to win the season in viewers for four consecutive years and having its largest victory over The Tonight Show since 1993.

While rival networks suggest that the numbers – NBC uses same day ratings figures – amount to a “rounding error in Iowa,” it’s clear that The Tonight Show is trending in the right direction, certainly among younger viewers.

It is, however, still a far cry from the bitter ratings battle between Jay Leno and David Letterman, particularly as a large portion of late-night viewing has switched to digital platforms such as YouTube.

Sweiss admits that there will always be focus on linear ratings in the late-night world. “It’s hard for people not to judge late-night by linear [ratings] because that’s always been the tradition and it’s such a clean metric compared to digital, which is all over the place with loads of platforms,” she told Deadline. “I do think the world is just a little bit bigger right now and there are so many ways of reaching people, so ultimately what matters to us is making a good show more than anything. A good show will find its way to people in whatever platform it may be, so all you can do is put on a good show and hope that people find it whether it’s online or on linear or both.”

It’s interesting to see that Jimmy Kimmel Live!, which is in second place in total viewers, is also regularly outperforming or tying The Late Show in the 18-49 demo, only coming third once in the last eight weeks.

Granet-Bederman said that she doesn’t look at the ratings “that tightly” every day. “We do look across late-night content-wise to see what types of pieces everyone is doing. We’re all such different shows and there’s room for all of us,” she added.

Fallon’s demo win streak comes as President Joe Biden has returned a sense of normality to politics and ultimately, on the whole, creating fewer wild and whacky news stories than his predecessor. This has obviously benefited the former SNL star, who is evidently more comfortable palling around than getting into the Washington weeds.

“When Trump was President, he ate up all of the real estate, he’s what everyone thought about and everyone talked about and now he’s not President, there’s more variety and we are a variety show so it does check out that we’re able to do more fun stuff to be the best variety show on television,” said Sweiss. “We were also doing a lot of good stuff in November and December, when Trump was still President that showed that we were trying to be more ambitious and try fun new things.”

There are also a few other things that have helped. Fallon is back in the studio proper and is able to bring in a small number of celebrity guests under Covid protocols such as Michael Strahan, who convincingly beat Fallon in a game of golf pong, and Kevin Bacon, who performed a ramblin’ musical number with the host (watch it below). “Having an in-studio guest is the ultimate feeling and it brings the energy,” said Granet-Bederman. “Things that three years ago we took for granted, we’re so excited to be able to do now.”

The show also has a limited audience for the first time in a year, something both Granet-Bederman and Sweiss point to as a boon. “I love it for Jimmy as a performer to have the audience there and to see the immediate reaction to jokes and bits and interviews,” said Granet-Bederman.

“There’s something about having an audience that gives you answers and you can tell if something works. When you have an audience, you know if it works — it’s so fun to have that immediate response and you can feel that energy,” Sweiss added. “When we were in 6A there was definitely a looseness that came without having an audience, you don’t feel you’re being watched. So now you have to be a bit tighter and respect the audience’s time. It’s different writing for a live audience — but we’ve all missed and craved that.”

Admittedly, while the situation with the pandemic currently looks good with falling Covid cases and an increasing number of vaccinations, it’s hard to plan that far ahead. Sweiss was initially set to co-run the show until early this year, having sold single-camera comedy Real People to ABC. However, with that project no longer moving forward, she is expected to stay, at least for now.

The late-night world has changed massively since the days of Leno and Letterman essentially being the only two after-hours hosts. In addition to Kimmel, who has been on ABC since 2003, there is now competition from the likes of The Daily Show with Trevor Noah, and, in a world where many are watching the next day, Late Night with Seth Meyers, The Late Late Show with James Corden, A Little Late With Lilly Singh and Desus & Mero.

However, other than the occasional pizza-based feud, don’t expect the late-night wars to get as dark or as controversial as they previously did. “All of the late-night hosts are so different – from their style of performance to comedy style. They’re actually all friends and really respect each other,” said Granet-Bederman. 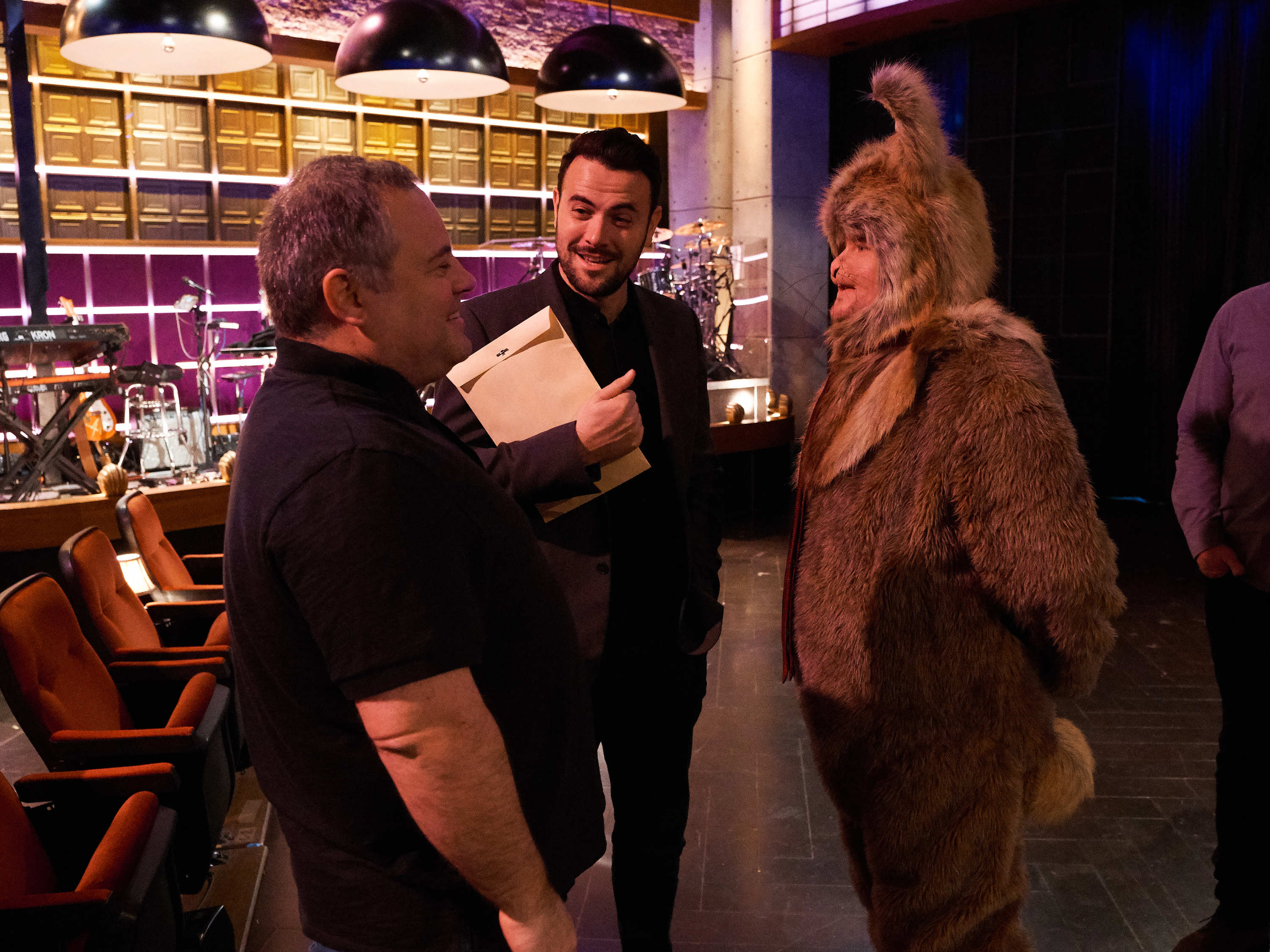 Tim Mancinelli (left) has been working on The Late Late Show for 26 years – through four different hosts – so he’s seen some things.

Starting as a PA on the show hosted by Tom Synder before moving up to associate director and now director, he’s covered Craig Kilborn, Craig Ferguson and, for the last six years, James Corden.

While the CBS show has gone through some changes in that time, arguably it’s been forced to go through just as many changes in the last year due to Covid-19. Starting out back in March with no audience, to shooting the primetime Homefest special and subsequent nightly episodes in Corden’s garage to getting back in the studio at Television City, it’s been quite the challenge.

“Even in the last year, I feel we’ve re-created the show three or four times,” the helmer told Deadline.

The show returned to the studio in September, albeit without an audience. The team restructured the set to that Corden is now sitting where the audience used to sit. “It’s a small stage that does big things. If you take the audience out of it, now it’s a big stage and you’re trying to fill it and we didn’t want to be on a big cavernous stage,” he said. “The crew became the audience.”

This has led to increased camaraderie between the crew, as seen by a recent show that saw his team persuade him to call Oprah Winfrey live to pitch her a business idea.

“It’s very free forming, a topic comes up and we could be discussing anything. Not having an audience is so different, but now I’m covering 20 people in a room so from my point of view it’s difficult because you only have six cameras and you’re trying to cover a conversation that’s pinging around the room with masks on and you can’t tell if people are talking so you’re listening. That’s been a challenge. But I think what we’re doing is really fun, I think James is genuinely having a really good time,” he said. 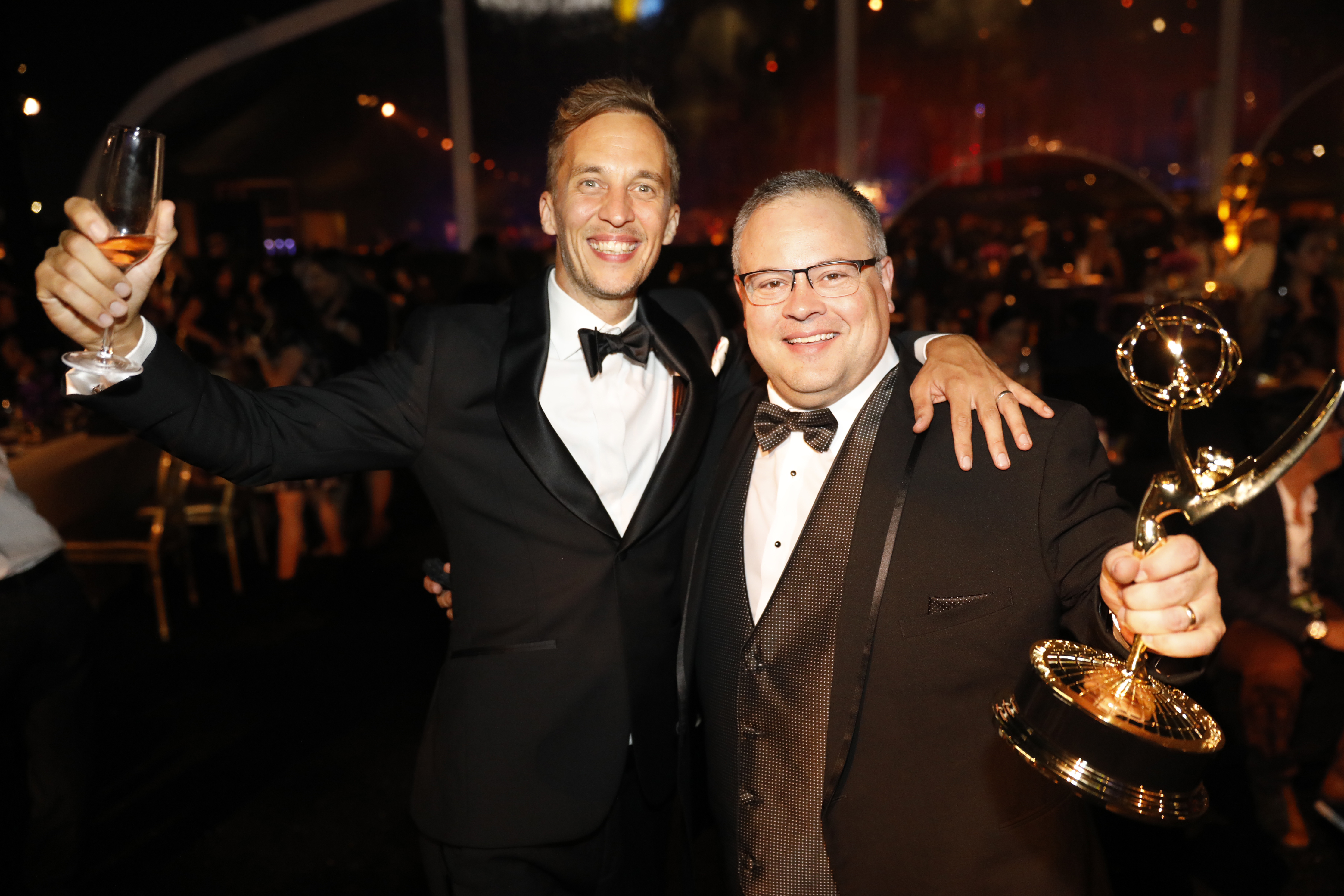 One of Mancinelli’s challenges is to ensure that they don’t lose this sense of fun once audiences do eventually come back. “We all feel that audiences are going to come back. How do you keep the magic that you’re making because when you add the audience, are you going to lose that feeling that we’re really enjoying, the camaraderie, the real looseness, there’s a real freedom when you’re with your crew and your staff to say what you’re going to say because you know it’s not going to just go out in the world, you can try anything and cut out the stuff that’s not funny,” he said.

The Tonight Show, which is filmed in New York, brought back a limited audience last month and given Los Angeles’ falling Covid numbers and rising vaccinations, coupled with the fact that American Idol brought in an audience on the same lot as The Late Late Show, it’s only a matter of time for the CBS series.

“Maybe this with an audience will be even more entertaining,” Mancinelli added.