If this represents the best offers Diane Keaton and Jeremy Irons are getting, then show business is broken 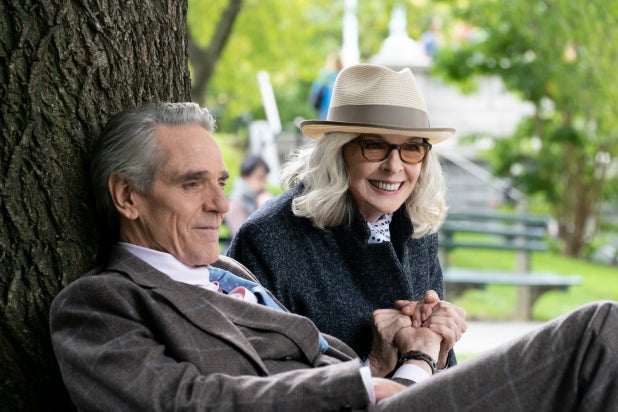 In stringing together various overlapping love stories, all of them thoroughly irritating and utterly lacking in human insight, writer-director Dennis Dugan seems to be auditioning to take over the painfully inane ensemble pieces of late-period Garry Marshall. I once joked that Marshall’s “Valentine’s Day” made “Love Actually” look like “Nashville,” but “Love, Weddings & Other Disasters” makes “Valentine’s Day” look like “The Shop Around the Corner.”

Dugan has spent the last quarter-century as one of the main co-conspirators of the Happy Madison Death-of-Cinema Fun Factory, but his terrible Adam Sandler movies (including “I Now Pronounce You Chuck and Larry” and “Grown Ups 2”) at least offer the allure of big names collecting a paycheck in movies that might not be funny but at least have the budget to provide the sheen of big-studio product.

Sheen is in short supply in the ugly “Disasters,” and the biggest names are two Academy Award winners so ill-used that their very presence reflects shame on the entire film industry. If this represents the kind of offers that Diane Keaton and Jeremy Irons are accepting, then show business itself is broken.

You don’t have to be a disability activist to cringe when Keaton comes literally crashing into her first scene as Sara, a blind woman who has been set up on a blind date (these are the jokes) with Irons’ Lawrence, a classy, in-demand caterer known for his demanding perfectionism. That this film thinks a pyramid of champagne glasses (the thing Sara knocks down) or a pyramid of Ferrero Rocher candies is “classy” is indicative of how divorced it is from life on this planet.

The other stories involve would-be wedding planner Jessie (Maggie Grace, serving Penelope Ann Miller realness) attempting to plan the nuptials of Boston mayoral candidate Robert (Dennis Staroselsky, “The Deuce”); Robert’s clumsy brother Jimmy (Andy Goldenberg), who’s on a dating game show that requires him to be chained 24/7 to Svetlana (Melinda Hill), who claims to be a lawyer but is actually a stripper (These. Are. The. Jokes.); tour-boat captain Ritchie (Andrew Bachelor, “To All the Boys I’ve Loved Before”), searching for a passenger with whom he shared a brief flirtation; and Mack (Diego Boneta, “Terminator: Dark Fate”) as a musician who’s falling in love with Jessie even though his band has been booked for Robert’s wedding and that same band is now ejecting him. (Boneta also appears in the acclaimed Mexican drama “New Order,” which means he’s part of one of the best films of 2020 as well as one of the worst.)

“Love, Weddings & Other Disasters” has absolutely nothing to say on the topic of love, not even when it cuts in seeming desperation to a pair of city-park buskers who sing songs on the topic of romance that are just as banal as the rest of the movie. You’d never know Boston was one of the world’s most beautiful cities the way it’s shot here — it comes off much better in Frederick Wiseman’s new documentary “City Hall” — and Dugan tries so hard to go for the joke that he short-circuits any kind of logic.

Why does the romance game-show look like crappy cable access when it’s supposed to be a hit on TBS? If Lawrence is such a stickler for detail, why does he leave a morning-after note for a blind woman before rearranging her furniture? If any of this were funny, it might not have to make sense, but all the gags land with a squishy thud, leaving audiences more time to break down the utter nonsense of the plotting.

This is one of those rare movies that contains not one single thing to recommend it. Spend the hour and a half looking at literally anything else, even if it’s the inside of your eyelids.