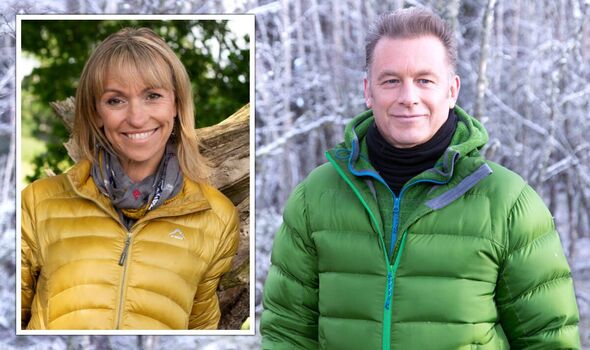 Michaela and Chris, who reunited on our screens last week to begin a new season of BBC’sWinterwatch, started working together on the Beeb’s The Really Wild Show but it wasn’t exactly the perfect match. But the pair now leave viewers tickled with their cheeky banter, with Chris once teasing her to “lay off the gin” after she got tongue-tied while on air.

Michaela, 56, admits the TV partnership is a tonic, and being immersed in nature also boosts her health.

While the seasonal programme brings the natural world into people’s living rooms, she admits they are cautious when covering climate change and negative subjects, as it can depress viewers.

Michaela recalls: “The Really Wild Show was about 30 years ago, so that’s how I first met Chris. It was so funny, because when I met him I was this blonde, very optimistic, very cheerful presenter, quite wacky.

“Oddly enough, we instantly got on and we’ve got on ever since. It was a relationship that just worked, despite the odds.

“I was into Kylie and he was into The Clash – you wouldn’t have thought that would be a relationship made in Heaven. But we always just got on well and had a huge amount of respect for each other.

On their wisecracks, Michaela added: “We can take the mickey out of each other and we’re not going to get upset.

“That’s what makes it a good fun on-screen relationship that allows that banter.

“It’s great to have a wildlife programme that has so much humour. Sometimes the two of us go off on one – what enables us to do that is because we’ve been doing it for so long and the audience trust us.

“If we try something that doesn’t work there is that eyebrow raise and no one really minds. Whereas if you were new to presenting you’d be instantly judged by it.

“I think our audience understands our sense of humour too,” said Michaela, who lives in South Africa with her wildlife director and cameraman partner Nick Chevallier and their teenage son. She is also stepmum to his three children.

Michaela and Chris, 61, brave all weathers to present the show outdoors. So could she rely on Chris for a warming cuddle on a cold winter’s day.

“Chris isn’t the sort of person you cuddle up to,” says Michaela.

Speaking about Winterwatch’s charm, with fellow presenters Iolo Williams and Gillian Burke, she said: “Our remit is to infuse and inspire people. Sometimes we’ve gone down the road of climate change heavily and people don’t like it. But we wouldn’t be doing our job if we didn’t talk about the problems.

“So it’s a fine line on ‘the watch’ – between informing people and making people care, but also inspiring them. The hardest one is the avian bird flu at the moment. You cannot tell that story without depressing people.

“We don’t want to pull the wool over people’s eyes, you’ve got to be honest. But you also can’t depress people to the point they feel immobile. So you have to keep inspiring people to feel they’ve got the power to do something.”

She says an outdoor life is key to her good physical and mental health, and Winterwatch encourages people to get outside during the shorter, darker days .

“I’m 56, I’m menopausal, and hiking has definitely become my thing. I will run occasionally but I don’t run as much as I used to. I’m often on a mountain so it’s not just flat hiking, it’s hard work.

“It’s definitely something I find very healing and very calming. I really hope Winterwatch inspires people to get out.”