In ancient Greece, the theatre was an arena for the discussion of the state’s preoccupations. The plays of Sophocles, Aristophanes, Euripides and Aeschylus were viewed as allegorical commentaries on the political and cultural dilemmas of the day.

These days, sport often does the same job. The furore surrounding the retirement of Indigenous football star Adam Goodes in 2015 supplied unsettling proof of that. 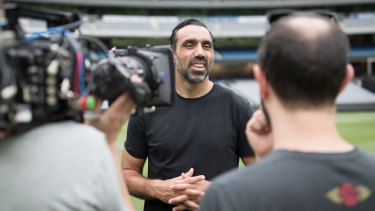 Adam Goodes in a second documentary about his career and race relations titled The Australian Dream.

Goodes’ outrage at a racist taunt from a 13-year-old girl in the stands during a Swans-Collingwood match in 2013 sparked an ugly reaction that travelled far beyond the football stadium. For months afterwards, Goodes endured sustained booing every time he touched the ball and media commentators weighed in on every side, blaming, defending and arriving at every shade of opinion in between. Finally, Goodes had enough, walking away from the game he had loved for 17 years. 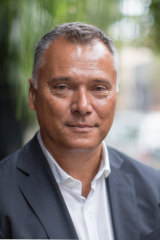 The Australian Dream examines race relations in Australia through the dual prism of the story of AFL footballer Adam Goodes and the words of journalist Stan Grant (pictured).Credit:Madman

The Australian Dream, a documentary feature written and co-produced by Indigenous journalist and author Stan Grant, is the second film to anatomise the controversy. We have already seen Ian Darling’s The Final Quarter, which concentrates on the last three years of Goodes’ life as a footballer. This one takes a more lateral approach, using Goodes’ experience as an analogy for white Australia’s conflicted attitude towards the dispossession of the nation’s First Peoples.

It’s an unashamedly polemical film. Grant himself is a pervasive presence on screen, eloquently summarising the state of the nation’s moral health and backing up Goodes with the worst of his own experiences as a young Indigenous man. “To us”, he says, the booing “sounded like a howl of humiliation that echoed across two centuries of dispossession, exclusion, desegregation”.

They’re powerful words, but they’re not nearly as moving as the rueful modesty displayed by Indigenous AFL veterans Nicky Winmar and Gilbert McAdam as they tell of their own anger at the racial abuse they suffered as players in the 1990s.

To us [the booing] sounded like a howl of humiliation that echoed across two centuries of dispossession, exclusion, desegregation.

They recall Winmar’s famously symbolic act of defiance when he raised his shirt and declared his pride in his Aboriginality – a gesture that Goodes repeated in tribute to him 20 years later. And it reinforces the fact that Goodes’ fateful act on that day in 2013 was not born of a single impulse. It was the culmination of years of indignation bottled up by a man who had never sought confrontation – unlike his harshest critics, some of whom earn a living with their taste for bombast.

There was plenty of sophistry on show. Some held the well-worn line that politics has no place in sport. Tough talk, whether racist or not, was all part of the game, they argued, while career conservative Andrew Bolt maintained that Goodes had overreacted, victimising the 13-year-old by identifying her and insisting she leave the stadium.

But the most pompous was sports commentator Sam Newman. After Goodes performed his now notorious war dance in front of a booing crowd, Newman adopted the manner of a finger-wagging headmaster to deliver a television lecture on his belief that Goodes was being booed not because he was black but because he was “a jerk”.

Much of this ground has already been covered in The Final Quarter, which has a lot more narrative punch, relying only on television footage shot at the time. Used without a voice-over, it puts you in the position of an eyewitness.

Grant and Australian Dream’s British director, Daniel Gordon, who made Hillsborough – about the 1989 Sheffield Stadium tragedy – are trying for something more reflective. But the result is often stagey and verbose, especially when they set about re-creating Goodes’ week-long retreat in the Flinders Ranges just before his retirement. There are too many studio interviews, too much repetition and too much sermonising. And while the film’s incursions into the past are done with archival footage, we have seen most of it before.

Grant and Gordon do succeed in their main aim, however, putting Goodes’ story in context to establish it as a crucial and instructive chapter in our history of racial relations.

They also demonstrate just how much further we have to go. Grant hits a nerve when he says that white Australia’s tolerance runs out as soon as Indigenous people dare to express their anger.