“Firefly Lane” is a tricky little dramedy. It’s cozy. It’s melodramatic. There are elements that sound ridiculous, but the overall air is sweet. It’s a show based on a popular book about friendship persevering through the decades. It also aspired to be a show about journalism, women’s issues, and maybe even war.

But at the core is the relationship between lifelong friends Kate Mularkey (Sarah Chalke) and Tully Hart (Katherine Heigl) as they navigate life, work, and love. Season 1 culminated with Kate’s ex-husband Johnny (Ben Lawson) being blown up in the Middle East while reporting a story and Kate and Tully falling out for unknown reasons. Season 2 doesn’t just have to provide the same level of overwrought hijinks as last year, it also has to wrap everything up. The nine episodes released December 2 comprise the first half of the show’s final season, with the remaining seven dropping in 2023.

“Firefly Lane” is going for broke. Everything feels bigger this season: the emotions, the acting, the music budget. The show has always been kooky, but this first half culminates with a race to say goodbye between two characters tuned to Coldplay’s “The Scientist”! Series creator Maggie Friedman is close to hitting “Grey’s Anatomy”-levels of intensity in terms of both emotions and the way popular music can become indelible in a scene. Happily, it all seems to work better than last season, perhaps because audiences are now primed to expect a certain level of theatricality (and bad wigs!) with their melodrama.

Still talking place over three crucial periods in Tully and Kate’s lives — the 1970s, ’80s, and 2000s — the script understands it needs to pare things down to wrap everything up. So if you enjoyed Ali Skovbye and Roan Curtis as young Tully and Kate, respectively, they take a bit of a backseat this season. The young girls are still great, particularly in this season’s second episode, “On the Road,” but they aren’t integrated into the main narrative as much as in Season 1.

Skovbye continues to get the best opportunities to act, particularly as her character struggles through ongoing trauma from her sexual assault last season. Skovbye’s face charts the conflict of a teenage girl who wants to be a sexual being but struggles with how to do that when sex is filtered through violence. At one point, Tully confronts her attacker, and Skovbye shows what a fighter Tully is, speaking authoritatively and confidently. 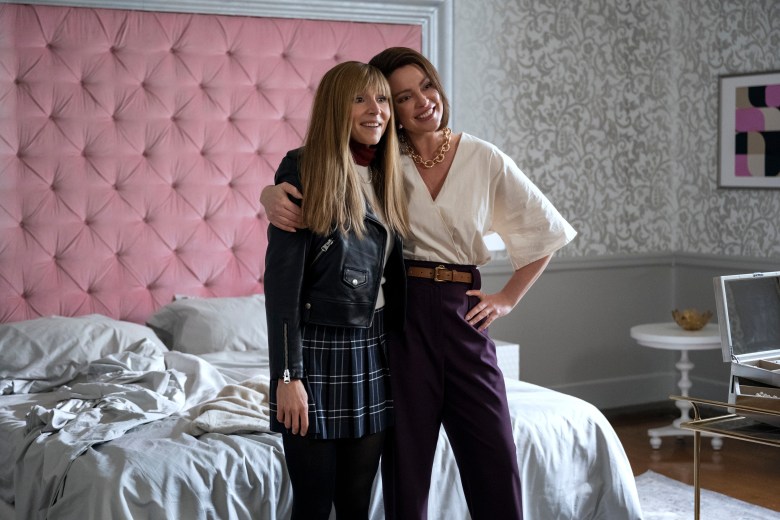 But less time spent with the teens gives Chalke and Heigl more time to carry the show, and they need to because a lot of plot happens in nine episodes. The relationship between Johnny and Kate anchors Chalke’s story this season, and it can be a little much watching the two canoodle endlessly throughout the 1980s portion of the story (that is, when Johnny isn’t chronically saying “Ma-LARK-y” in his Australian accent). Once the story transitions to the 2000s, it’s still very much about Kate and Johnny’s relationship, and the performances are equally one-note. There’s something pat about watching how the two decide to get married and start their life together. And considering they broke up during Season 1, the crux of Season 2 is the inevitable “will they get back together” narrative that is easily deduced the first time Kate has a sex dream about him.

Chalke has always played Kate as awkwardly as the character’s last name, and it’s never really believable to see her play the character as a girl nerd with an inner perv just dying to break out. She’s just too goofy, punctuating every scene with a shoulder shimmy or a too-wide grin. She acts like a character far younger than her years, a fact unaided by the bad 2000s-era wigs and fashions she’s saddled with. It isn’t until the final episode that the scripts kick Kate firmly into drama territory that will, no doubt, anchor Season 3. Unfortunately, since Season 1 already had a similar medical plotline, the full-circle attempt just reads as running out of steam.

The series’ highlight remains Heigl, who gets the better storyline this time. Gone is the good-time party girl of Season 1 and in its place is a serious reporter trying to pick up the shattered fragments of her life. Sure, it’s hilarious watching Tully dive into the uncharted waters of, gasp, blogging, but Heigl has such command of who Tully is that it’s easy to understand why audiences in the show would identify with her. Heigl plays all of Tully’s different emotions and perfectly illustrates how often the undercurrent of selfishness plays out, like when Tully starts to reject Kate’s chronic desire to be with Johnny.

When the audience finds out why Kate and Tully have stopped speaking, Heigl shows such remorse that it’s hard to understand Kate’s antipathy towards her. But, more importantly, Heigl anchors a massive plot throughout the season that transcends the mysterious bad thing that separates the friends. Last season, the true drama was found in Tully’s relationship with her mother, Cloud (Beau Garrett), and the pair are nearly as inseparable this season as Kate and Tully were. In some respects, this is a better-written story than Kate and Tully’s friendship because Heigl and Garrett have to show the pain and love that is constantly at odds in their relationship. Sure, the addition of Tully searching for her dad is a bit maudlin, but it gives Heigl a great opportunity to go from laughter to tears in a pivotal scene that is amazing to watch.

It’s doubtful this season will do much to bring new fans into “Firefly Lane,” but it remains a compelling soap opera for those who can remember growing up in each of the respective eras the series focuses on. Chalke and Heigl still work well together, but this remains, firmly, the latter’s show. Despite it all, we’ll miss this duo. It’ll be sad to say goodbye to the “Firefly Lane” girls and all their wacky hijinks next year.