Photos just dropped from The Bachelorette’s upcoming Men Tell All special, and while yes—we’re here for the drama—we’re also very much here for the looks. Specifically, Tayshia Adams’ gorgeous pinkish orange leather dress. 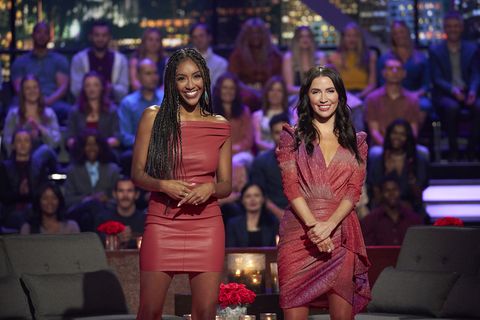 According to @starstyle_com, which covers all things Bachelor Nation fashion, the dress is from Rick Owens and it’s currently available to fly into your closet at any given moment. Heads-up that it’s pretty pricey at $1,475, but tbh, a look this good might be worth it depending on how much you feeling like putting your poor, long suffering credit card through (answer for me: a lot).

(Also, psst: a long-sleeved pink version of the Athena dress is currently on super sale at Net-a-Porter for $234.23 if you feel like scooping that up!)

Kay, while you contemplate whether or not you should risk it all for this incredible dress, a little about the Men Tell All—just note, SPOILERS are below:

Apparently, this year’s Men Tell All was filmed in front of a live audience, and according to Reality Steve “there was about 12 guys there total” at the taping last week. No details on everyone who made the cut, but apparently “Michael A. and Andrew were both there since they’d just been eliminated.” Meanwhile, Justin Glaze, Greg Grippo, and Blake Moynes were unfortunately unable to make the taping because they’re Katie’s final three—but they’ll all likely be at the After the Final Rose special so no worries!