Phillip Schofield and Holly Willoughby spoke about taking part in Saturday Night Takeaway’s ‘On Air Dares’ with Stephen Mulhern today. It came after Ant and Dec caused havoc on daytime TV shows across ITV last week as they challenged the live morning shows to a series of pranks and dares. Stephen was in charge of orchestrating the mission and when This Morning’s Phillip and Holly got involved, they apparently “got in trouble” for the pranks they played. But they weren’t the only ones taking part as chef James Martin was also involved in the set-up. Nevertheless, their efforts saw them win the challenge, beating Good Morning Britain, Lorraine and Loose Women in the process.

Kicking off today’s show outside as lockdown restrictions ease across England meaning you can meet with six other people outside, Phillip said: “We’re also going to talk a little bit later about Saturday Night Takeaway.”

“Don’t know what you’re talking about!” James joked and Phillip continued: “And what happened and the fact that my mum was so angry.”

“You both – you got into trouble didn’t you?” The chef asked and Holly replied: “We did! We did get into trouble. But we won, that’s the important bit!”

Stephen showed up unannounced at four of the daytime tv shows and set the presenters a challenge to follow the words, phrases and actions that he had written on cards.

Each show had to make sure that their viewers didn’t know that Stephen was there and if they wanted to skip one of the cards they had to stroke their chin live on air. 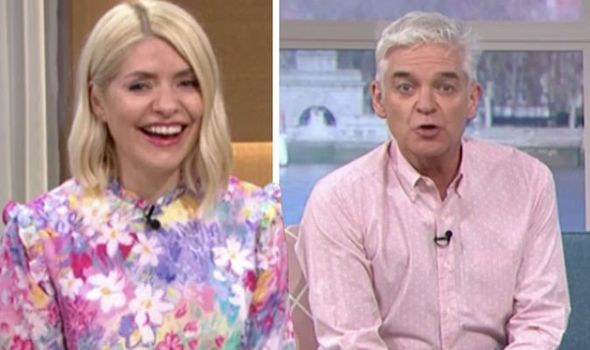 Dec told SNT viewers: “We have got a bit of a mystery to clear up. Some of you may have seen in the papers and on social media this week, there were some strange moments reported on Good Morning Britain, Lorraine, This Morning and Loose Women.

“There are some of the headlines,” he said posting to the collection of titles behind him. “It even made news in France!”

Ant added: “ow a lot of the people were speculating that it might have something to do with Saturday Night Takeaway.

We would like to make it very clear that those people… were absolutely right!”

As for what Holly and Phil were tasked with doing, Holly said she was bursting for the toilet and also said the words “flaps” and “moist”.