Piers Morgan ridiculed ABC News for sharing an article about Britons allegedly celebrating the nomination of Joe Biden with widespread fireworks displays. The American broadcaster put out a tweet shortly after the US Election 2020 was called in favour of the former vice-President, commenting on a fireworks video with: “Fireworks lit up the night sky over London, UK, after Joe Biden was characterised to be the apparent winner of the presidential election.” Mr Morgan however had to point out the announcement coincided with the annual celebrations for Bonfire Night.

Mr Morgan said: “Americans are getting a little bit over-excited about the global reaction to Joe Biden’s win.

“ABC News, that bastion of factual accuracy, tweeted this yesterday, implying that all over this country we were celebrating Joe Biden’s victory.”

Co-host Susanna Reid also pointed out: “What’s extraordinary is that we do this every year.”

Which led Piers Morgan to add: “Which means we’ve been celebrating Joe Biden’s win for the last 500 years, ever since Guy Fawkes, Bonfire Night, started.”

JUST IN: US trade BONANZA: Boris Johnson given huge boost for bumper deal – ‘Let’s do it QUICKLY’ 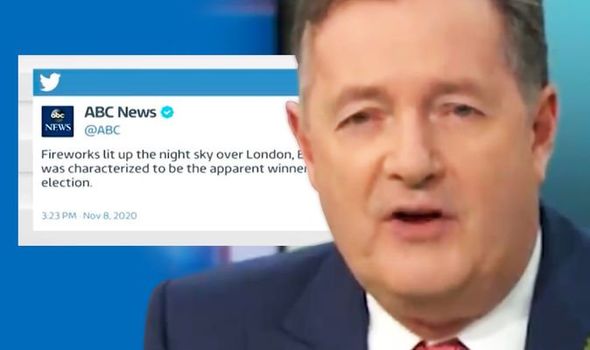 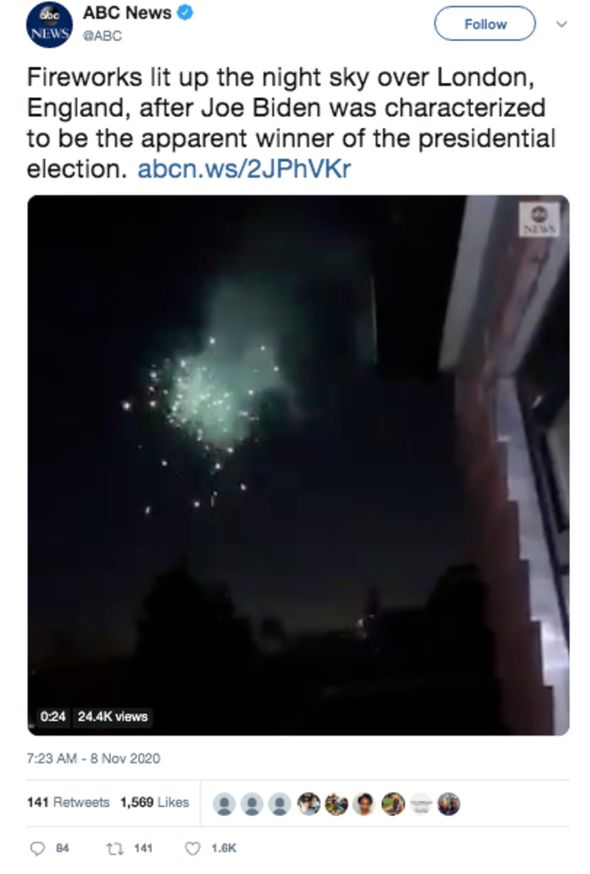 The US Election 2020 proved to be far more troubled to call than previously expected, as the majority of votes took over four days to be counted.

Despite Joe Biden now projected to have won, incumbent President Donald Trump has shown no willingness to concede and is expected to challenge the result.

Mr Trump has accused his opponent of “fraud” and cheating him out of the election, demanding only “legal” votes are counted as he suggested the possibility of tampering.

However, no evidence of either fraudulent activity or tampering has been found, with several international leaders officially congratulating Mr Biden and his vice president-elect Kamala Harris for their win.