Ralph Fiennes has never been a big ballet enthusiast, he says, but Rudolph Nureyev's story somehow touched him.

Perhaps it was the very Russian life of this boy who grew up achingly poor in the Soviet city of Ufa, but made it into the Kirov Ballet, then defected in Paris. Perhaps it was his sheer monstrosity. 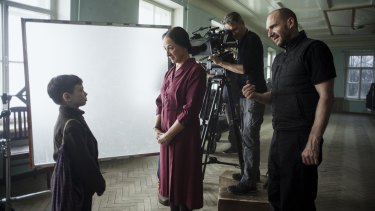 Director Ralph Fiennes (right) on the set of The White Crow.

"People who remembered him from school said he was touchy; he didn't want to clean the floor because he said it was women's work," says Fiennes. "He would lash out; he held himself to himself; but he also managed to get people to like him. I instinctively like him myself."

The White Crow is Fiennes's third film as a director. Although it takes place in three different time periods, he says it isn't a biopic; the crux of it is about Nureyev's defection to the West.

He was on tour in France in 1961. Both Fiennes and David Hare, who wrote the screenplay, are convinced his reasons weren't political; they had more to do with a terror of being limited as an artist. Moscow suspected his enthusiasms and tried to rein him in, thereby losing the greatest male dancer of the age.

Fiennes also plays Alexander Pushkin, a gently inspirational teacher at the Vaganova ballet school in what was then Leningrad and Nureyev's mentor, speaking the Russian lines with apparently complete confidence.

His interest in the language, and most particularly the Russian theatre, goes back at least as far as his starring role in Onegin, directed by his sister Sophie Fiennes in 1999. Since then he has gone back regularly, drawn by friendships and the persuasive urgency of Russian theatre.

"I feel there's a kind of commitment to being an artist there which is sort of hungry and intense," he says.

He remembers a great Cherry Orchard; a fantastic Metamorphosis; a revelatory Onegin.

"There is a seriousness about what it is to put on a play or to play a role," he says. "The actors are all so brilliant in every single part and although I'm not understanding everything, I'm completely engaged. And the theatres may be in need of a coat of paint but there is also a sort of hunger for it in the audience."

One of the thrills of filming The White Crow partly in St Petersburg was being able to cast some of the Russian actors he most admires.

Finding a dancer with an actor's emotional range was a tall order.

But Oleg Ivenko, who plays Nureyev, was an unknown. Fiennes was determined to cast a Russian. He also knew he needed a dancer. "I thought, 'I don't want to see an actor trying to be a dancer'. Dancers have a specific physicality because they've been dancing since they were children," he says.

Finding a dancer with an actor's emotional range was, however, a tall order. Ivenko eventually convinced him with a screentest in which he had to snap imperiously at his new French friend Claire (Adele Exarchopoulos) over dinner, "sort of 'f— you' but also 'I'm flirting with you'."

Ivenko, says Fiennes, is "naturally smiling and nice"; it didn't come easily. "But I got back home and I looked at the screentests and I thought, 'That's him'."

From some angles he even looked like Nureyev, but the crucial thing was that born sense of exceptionalism. Is that acceptable in real life? Is it even tolerable? Fiennes isn't sure.

"But that's some kind of pure ferocious spirit that I want to watch."

The White Crow opens on July 18, with advance screenings on July 14.