Add a twinge of melancholy to your gift giving this year 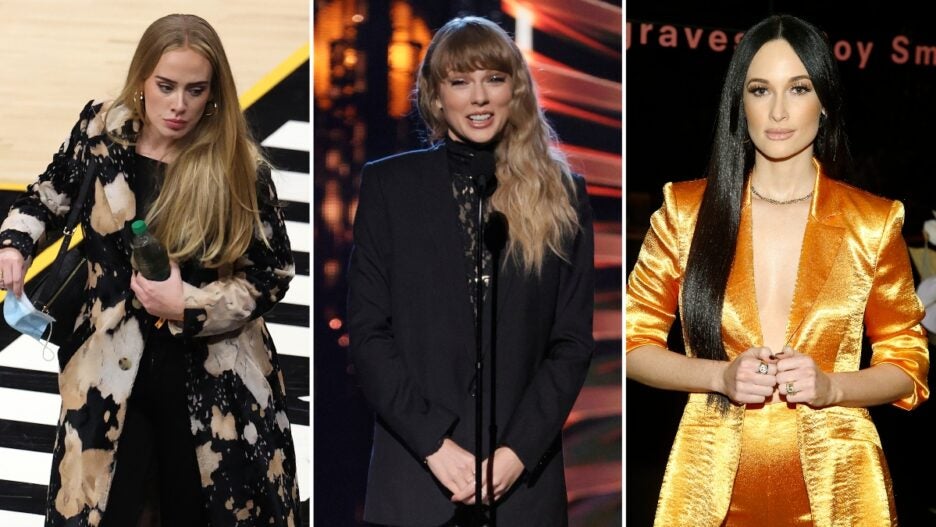 ‘Tis the season for gift-giving, but finding the perfect present can be challenging. A host of gift guides are currently making the rounds, but we thought we’d go hyper-specific for a very particular kind of person. Behold, our “Sad Girl Autumn” gift guide, celebrating everything Adele, Taylor Swift, Kacey Musgraves and more. Indeed, this past fall was unofficially dubbed “Sad Girl Autumn” or “Sad Girl Fall” by fans of the aforementioned female recording artists who all released new material — most of it absolutely packed with melancholy.

So if you’re looking for the perfect gift for the “Sad Girl Autumn” fan in your life (whom you certainly know all too well), check out our roundup below.

Kacey Musgraves’ album set things up for a very successful “Sad Girl Fall,” when her fourth studio LP, “Starcrossed,” debuted just 12 days shy of the Autumnal Equinox this year (September 22, 2021).  You could even say Musgraves set “Sad Girl Fall” up to happen like a “Slow Burn.”

“Slow Burn” is not just a song by Musgraves off her Grammy-winning album “Golden Hour.” The singer collaborated with Boy Smells, a fragrance and underwear company, to create a “Slow Burn” candle, which smells like incense, black pepper and guaiac wood, with notes of smoked papyrus and amber. The artist herself describes the scent as reminiscent of the “last sips of a Negroni at the bar down the street, expressed through hints of elemi and tonka bean.” You can purchase a candle here.

“Star-Crossed” has also inspired a lot of themed merchandise besides the vinyl, cassette tape and CD box sets of the record itself. Clothing items that relate to “Star-Crossed” include purple sweatpants with the album title on one leg, a matching tee, a cropped hoodie, featuring a photo of Kacey  from the short film, a black “Simple Times” T-shirt and more.

If you’re not in the “Star-Crossed” mood, Musgraves has plenty of other past merch to choose from, since she has been writing sad girl songs since her first album. Specific honorary autumnal anthem apparel includes “Happy & Sad” T-shirts , the “Lonely Weekend” inspired tie-dye kit and socks, a “Rainbow” tee and a Beijing “Slow Burn” T-shirt and sweatpants. You can even buy a T-shirt that commemorates Musgraves’ iconic “Saturday Night Live” performance inspired by Jenny from “Forrest Gump,” in which she went onstage naked but had her acoustic guitar to cover most of her body.

Moving onto our second sad girl that really contributed to this fall season: Taylor Swift. Swift re-recorded her album “Red” and timed the release for Nov. 12 to coincide with all of those “autumn leaves falling down like pieces into place.” “Red (Taylor’s Version)” can be purchased in vinyl form (featuring four discs and the lyrics to the ten minute version of “All Too Well” centerfold) or CD form, as well as digitally.

“Red” Merch — Including a Cardigan

Swift has an endless supply of merchandise and accessories based off of her re-recorded version of “Red” as well as the “All Too Well” short film. “Red (Taylor’s Version)” apparel and accessories range from sweatshirts and T-shirts donning photos from the “Red” photoshoot by Beth Garrabrant, a “Red” ring and even a “Red” cardigan. The short film inspired more merchandise, such as a poster for the film, an “All Too Well” notebook modeled off the book in the film, a “We’ll Run” locket and a red scarf like the one Sadie Sink wears in the video.

The third and final sad girl in the trifecta of “Sad Girl Fall” 2021 is none other than Adele. The British singer released her fourth album (her first in six years), “30,” on Nov. 19. More information on gifts for Adele-lovers can be found on her website.

If the three artists mentioned above do not fit your brand of “Sad Girl Fall,” look out for items from Billie Eilish (who just released a perfume), Phoebe Bridgers (who collaborated on the “Red (Taylor’s Version)” vault song “Nothing New”) and Mitski, who has released a few songs off of her upcoming album, which will drop Feb. 4, 2022.