From YA novels to streaming, we’ve all been existing on a steady diet of magical creatures and fictional world building over the past year… and for obvious reasons. But even if you’re well-versed in “Chosen One” storylines and star-crossed romances and heroines with spunk, you’ve never seen something quite like Netflix’s latest fantasy series, Shadow and Bone.

Part of that is because it’s based on something called the Grishaverse—a world filled with mythical beings and lore-like prophecies and street gangs— written by best-selling author Leigh Bardugo. But a bigger part comes courtesy of all the ways showrunner Eric Heisserer has changed the universe Bardugo began building years ago. The show features a diverse lineup of actors inhabiting roles that feel refreshingly modern given their fantasy setting— think mixed-race heroines, queer heroes, and gender-fluid characters. One of the actors responsible for bringing those characters to life is Jessie Mei Li, who plays the series’ protagonist, Alina Starkov.

Gifted with the power to summon the sun, Alina is burdened with a terrible responsibility: to save her war-torn nation by destroying the sea of darkness known as the Shadow Fold that has divided her country for centuries. And she must do it while confronting her own murky past, her desire to belong, and a troubling attraction to a mysterious man known as General Kirigan, or The Darkling for book readers. (Hello, Ben Barnes.)

Cosmopolitan hopped on a Zoom call to chat with Li about stepping into this fantasy world, changing Alina’s heritage to reflect their own mixed-race background, anti-Asian rhetoric in the media, and building a romance based on consent.

The biggest change from book to screen is the addition of Alina’s mixed-race heritage, which is great, but I’m wondering what the casting process was like for you?

I noticed on the casting call that they were looking for a mixed-race Asian, but they didn’t really specify. Eric Heisserer said that they were going to find the right person and then that would dictate what Shu Han (the homeland of the Shu people) looked like. So obviously, I think many mixed-race and actors of color, that can sometimes make a little alarm bell go off. You think, ‘Why? Why are you doing this?’

But then I looked at the audition sides and Eric had written these fake scenes where they talk about [Alina’s] history, her childhood, her eyes. I just thought, ‘Okay, they are not going to shy away from this. This is going to be in the story.’ That’s important, because if you’re going to cast me, it brings what I look like, yes, but also who I am and what mixed-race people go through. So I think it was just such a good decision and it gave so much more to play with. ‘Why is Alina the way she is?’ Well, it’s because she spent her whole life being ostracized and she’s had to build up this persona like, ‘I’m not going to hurt you. I’m going to keep my head down.’

Did any of your own experiences inform how you played that onscreen?

I definitely did bring a lot of my own experiences. The way that racism is in the show, little comments are made, and I do feel like they come out of nowhere. It’s almost, forgive my language, but it’s that, ‘For fuck’s sake’ feeling. Like, ‘Are you serious?’ You think you’re in a nice environment, and then suddenly a stupid comment comes out of nowhere. I think that was really accurate to my experience.

Here in the States, the Asian community is going through a really terrible time. There’s a lot of anti-Asian rhetoric happening and violence against the community. Because they’re seeing such negative rhetoric right now, is it even more important to give young Asian audiences someone to be able to relate to on-screen— to see the good and the bad of Alina’s experience?

In my opinion, it’s important not to shy away from the darker side of things, because that’s many people’s experience and that’s what makes people care about a character. It’s not that this character is 100 percent good and everything that happens to them is good. You want to see the difficulties and see yourself reflected in them. That’s why we watch things. That’s why people fall in love with characters and have posters of them on their wall, because they can see themselves and what they want to be or what they have been.

Racism towards Asians has always been super prevalent, but it’s something that people never talk about. In lots of American TV shows, you’ve got the very emasculated Asian male, or the super Asian nerd who only knows about math and has no social skills, or the crazy uncle with an accent. It’s those three archetypes and very little else. So it meant that growing up for me, my dad was mocked relentlessly in front of me, and I would almost play into it. He would play into it. He was sent to the UK at 13 years old where he was one of the only Chinese people in school. He didn’t speak English. So he played into this thing because it’s just accepted.

And especially as a mixed-race person, there’s another level of just like, ‘Well, I’m half white. I don’t have an accent and I don’t speak Cantonese. So can I really…?’ There’s so much conflict. I think it’s really important that people can see how stupid racism is. It’s so stupid. But, you might watch something that’s based very much in our reality and people will feel attacked and maybe feel guilty. It’s almost safer in a fantasy setting. You can be more objective because these people don’t exist and these races are different and you can see it in a new light without feeling got at.

Another big change from the books is the relationship between Alina and General Kirigan. Alina has so much more agency in the show.

Exactly. Rather than the plot happening to Alina, the writers made sure that she made the decisions throughout the story, which was just such a smart move. We need to see her making these choices.

So when things turn more intimate and more romantic, Alina’s the one who kind of makes the first move, and that was important. Ben Barnes refers to it as sort of a yin and yang. They see parts of themselves in each other. But on top of that, I think given the nature of him being much older and having the power in the situation, we still need to believe that they are equals. So her making that first move, and even just the scenes earlier on in the series where she talks to him in a more confident way than she talks to other people was really important. I think they feel this connection and she does seem to be comfortable around him from quite early on, in this weird way. 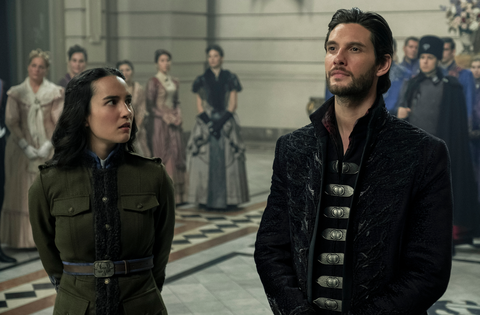 How do you channel that on-screen?

Our director had loads of references for us in terms of relationships. Me and Ben watched Jane Eyre with Michael Fassbender. That relationship between Jane and Rochester, it was very influential because it’s a similar thing. He needs her and she needs him. So we watched that with some Indian takeaway in the first week.

So this is definitely a relationship we should be questioning throughout the season?

Well, this is the thing, the way Ben sees Kirigan is that he had good intentions, but over so many years of everything going wrong, so much pain has distorted his view. He sees the goodness that he does have in Alina and vice versa. I think it’s a relationship that people will talk about and people will probably disagree on. Which, again, just makes it more interesting for people watching and for us playing those roles.

I just love that we’re so far away from that “damsel in distress” type of romance trope. Fantasy has grown past that.

Totally. We don’t need another sort of blushing virgin. It’s just not realistic. This isn’t her first rodeo. She’s had some experience, and that’s cool, and that’s okay. I think it’s important to see realistic women in fantasy right now.