It’s all or nothing for Melissa Benoist’s Kara Danvers and her Super Friends in the final hours of the CW’s Supergirl.

Kicking off with “The Last Gauntlet,” Supergirl picks up right were the previous installment left off – with Esme (Mila Jones) in Lex (Jon Cryer) and Nyxly (Peta Sergeant) possession. A hostage in hand, the criminals-turned-lovers propose that Kara, Alex (Chyler Leigh) and the rest of the gang trade in their totems for the kid. Of course, this is before Lex and Nyxly realize that the Love totem, absorbed by Esme in the previous episode, is already looking for a new host.

J’onn (David Harewood), Kara, Alex and Kelly (Azie Tesfai) reflect on how they’ve put their loved ones in danger – grieving the recent death of William Dey (Staz Nair). They’re all in agreement that they will continue doing “whatever it takes” to get Esme back – including harnessing the power of the sun. But more on that later.

Over at Lex’s, the villain’s mother Lillian (Brenda Strong) warns Nyxly that her son is using her for his own personal gain, despite his declarations of love. Throughout the episode, the Love totem’s petals begin to fall indicating that the time for a new host is nigh. Lex extracts the totem, despite Nyxly’s wishes, which then falls in the later’s hand. Nyxly then meets with Alex and Kelly, and Dreamer (Nicole Maines) and Brainy (Jesse Rath) who have decided come for support.

“You’re nothing but a foul little man who lies and cheats and play mind games to get what he wants. You’re just like my father,” she tells him.

Just when Nyxly and the Super Friends meet to make the exchange, the totems come together to form the All Stone. Lex appears and bombs the bridge holding Nyxly, Esme and all those involved in the trade, splitting the all-stone in various fragments. Meanwhile in National City, Supergirl absorbs the power of the sun through a government satellite, per Brainy’s suggestion, to gain near invincibility to Lex and Nyxly’s powers. As a consequence to the solar drain, National City breaks into chaos with resident questions why Supergirl is sending them into darkness. Secretary Brown (Crystal Balint) arrives and threatens to call an air strike on Supergirl, which then urges Kara to stop the process.

She and J’onn reunite with the other Supes to kick some Lex-Nyxly butt. Also there is Lena (Katie McGrath), who also uses her own supernatural abilities to ward off their enemies, who are fighting each other. Lillian sacrifices herself for Lex who was supposed to be the target for one of Nyxly’s All Stone blasts. Lex and Nyxly take the fight to National City, leading into the simply titled “Kara.”

There, the team realizes that Lex and Nyxly are draining citizens of hope, love and truth to power up their totems. Inspired by Orlando’s (Jhaleil Swaby) words of encouragement, Kara broadcast uplifting words via the Tower to help the people of Earth believe in themselves and their power. As a result of the combined empowerment of the people, Lex and Nyxly are rendered powerless, almost. Nyxly summons other-worldly monsters and Lex beckons his villains. 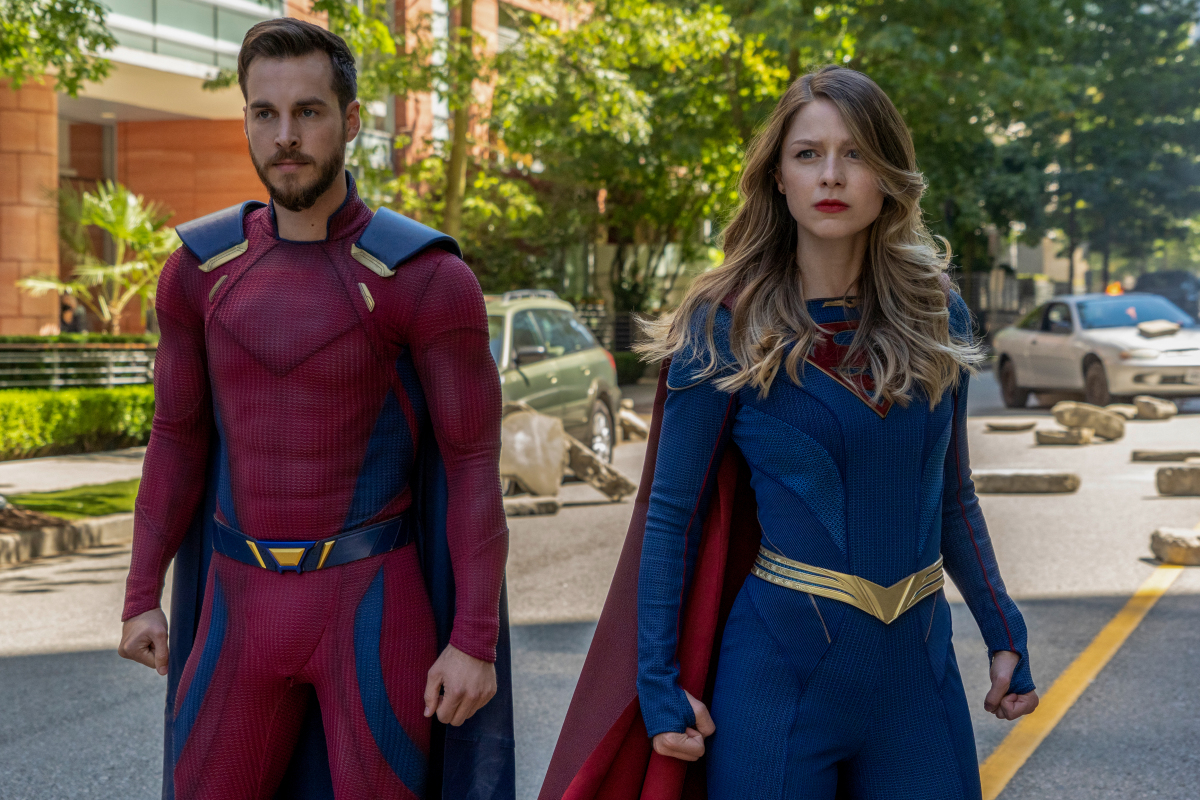 Mon-El (Chris Wood) returns to the scene to save Supergirl from herself, quite literally, after Lex’s Dark Supergirl seeks to destroy the original. He’s just one of the familiar faces returning for the series’ grand finale, including Alex’s mother Eliza Danvers (Helen Slater). They’re joined by the rejuvenated people of National City.

The Phantoms return at Lex’s call, but takeaway Lex and Nyxly,preying on their fear. The two are taken to the Phantom Zone.

Now the final act of the finale moves quickly with new chapters for the heroes. The government reinstates the DEO, a new school of journalism is erected in William’s name and Dreamer begins her own LGBTQ+ charity.

Finally Alex and Kelly’s big day is right around the corner but Kara isn’t feeling the excitement. People have learned not to rely on Supergirl, using the power within themselves to be their own saviors. Kara gets a call from Kat Grant (Joan Juliet Buck) who says she’s bought back CatCo and will bring Kara on as editor-in-chief. However, Kara isn’t so sure about her purpose.

Wedding Day has finally arrived for Kelly and Alex. Brainy devotes himself Nia, letting go of his obligation to the future.  J’onn walks Alex down the aisle and officiates the wedding. Nia catches the bouquet and Brainy shares that he’s well aware of a future where he ends up with her. 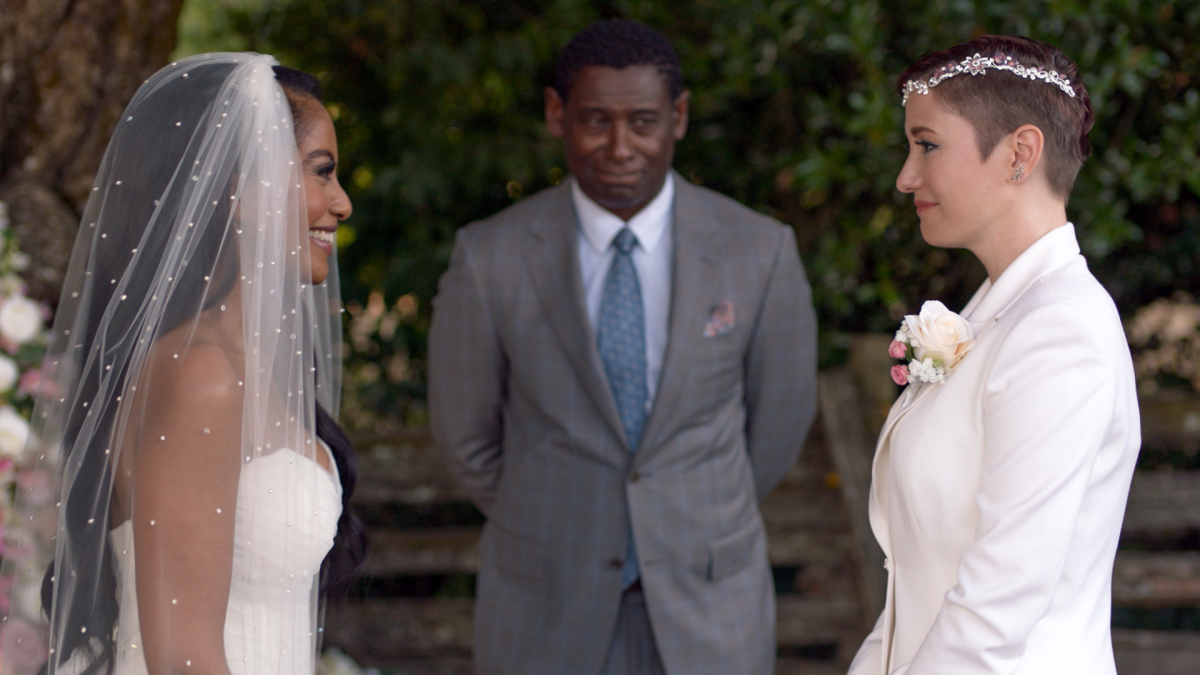 Kara, Winn(Jeremy Jordan) and Jimmy (Mehcad Brooks) reunite to reflect on their early days together and how they’ve grown. When Kat calls kara, who says she doesn’t feel whole, she surprises her former writer but revealing her knowledge about Supergirl’s real identity.

“Please, those spectacles disguised you as a much as Groucho Marx glasses, you should have just added the busy eyebrows and mustache,” Grant said.

Rocked by the news and inspired by Kat’s words of encouragement, Kara looks to be authentically her full self and lead a life unclouded by lead glasses.

The series ends with a touching and intimate segment, that looks like Supergirl hanging with her loved ones, but feels like the actors reflecting on their time with the series.

“The last six years with all of you have been the greatest adventure I’ve ever could have imagined,” she says. “I can’t wait for the next one.”

Finally, Kat Grant gets her exclusive scoop with a one-on-one interview with her own “ace reporter” slash National City savior.

The cast of the Arrowverse series and additional talent reacted the the series ender on social media. See their posts below.

Steve McQueen Sets Next Film ‘Blitz’ At New Regency, Where He Made ‘12 Years A Slave’