If you thought AFC Richmond’s relegation would weaken Ted Lasso‘s optimism, the Season 2 trailer is here to prove otherwise.

In a new, two-minute promo shared by cast members on Monday, Jason Sudeikis’ sunny soccer coach is back, and he’s (mostly) unruffled by the team’s recent demotion to a different division. But when AFC Richmond’s future starts to look particularly uncertain, Ted introduces his players to his alter ego, Led Tasso — and his coaching methods are weird.

Elsewhere in the trailer, Rebecca and Ted share a few sweet bonding moments, while Roy and Keeley’s relationship appears to be going strong (if that holiday kiss is any indication). 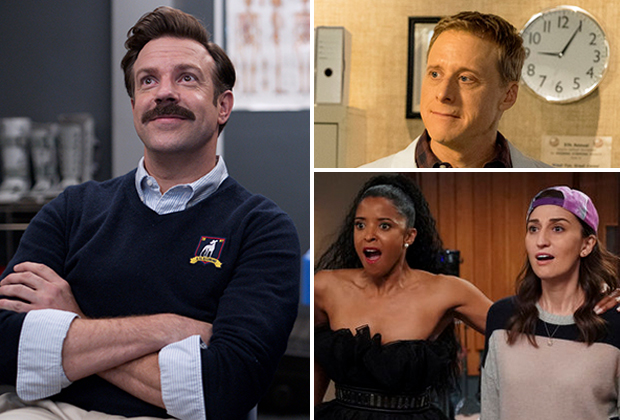 For the uninitiated: Ted Lasso is based on a series of Sudeikis-fronted promos for NBC Sports that aired in 2013. Sudeikis plays a small-time college football coach from Kansas hired to coach a professional soccer team in England, despite having no experience coaching soccer. Hannah Waddingham, Brendan Hunt, Jeremy Swift, Juno Temple, Goldstein, Phil Dunster and Nick Mohammed co-star.

The series was renewed for a second season just days after its August 2020 premiere; an early Season 3 pickup followed in late October, as Apple TV+ claimed that Ted Lasso was setting completion records for an original series.

TVLine named Ted Lasso one of the 10 Best Comedies of 2020, while Sudeikis earned a Performer of the Week nod for the episode in which newly divorced Ted suffered a panic attack. TVLine readers gave both the freshman finale and Season 1 as a whole a rare average grade of “A+.” More recently, Sudeikis took home a Golden Globe and a Screen Actors Guild award for best comedy actor.

Ted Lasso returns Friday, July 23. Watch the full trailer below, then hit the comments and tell us if you’re looking forward to the new episodes.