“To be clear, they’ve been great, that may have been the ONLY fight I lost in Season 1,” Kripke writes 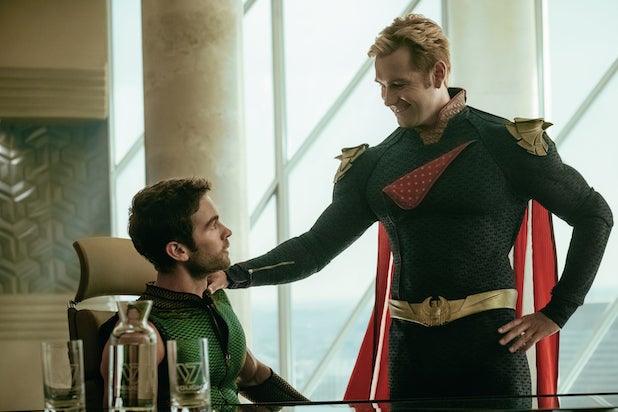 Amazon Prime Video clearly let “The Boys,” its new, very mature superhero series, get away with a lot on screen that you wouldn’t see in any broadcast or cable show — and definitely not in any film from the Marvel Cinematic Universe.

But seeing as this project, developed by Eric Kripke, Seth Rogen and Evan Goldberg, is based on Garth Ennis and Darick Robertson’s graphic graphic novels, it’s safe to say the streaming service knew what it was going to be dealing with from the start. And according to Kripke, there was just one scene the tech giant made him leave out.

“There was ONE SCENE that Amazon said F–K NO, you have to cut,” the co-creator told fans during a Reddit AMA Tuesday. “I couldn’t quite understand why considering everything else we have in the show, but: Homelander [played by Anthony Starr], after being dressed down by Stilwell [Elisabeth Shue] in episode 2, was standing on one of the Chrysler building Eagles. He pulled his pants down and started jerking off, mumbling ‘I can do whatever I want’ over and over again until he climaxed all over New York City.”

He added: “We shot it! Oh my God, Anthony was the BEST in that scene. Amazon seemed to think it wasn’t necessary. I thought it told me something about his psyche. To be clear, they’ve been great, that may have been the ONLY fight I lost in Season 1.”

Here’s Amazon’s description for the show, which launched July 26:

“The Boys” is a fun and irreverent take on what happens when superheroes – who are as popular as celebrities, as influential as politicians and as revered as Gods – abuse their superpowers rather than use them for good. It’s the powerless against the super powerful as The Boys embark on a heroic quest to expose the truth about The Seven, and Vought – the multi-billion dollar conglomerate that manages these superheroes and covers up all of their dirty secrets.

Season 1 of “The Boys” — which has already been renewed for Season 2 — is streaming now on Amazon Prime Video.