The latest edition of the ITV programme The Chase had fans truly on the edge of their seats as they were faced with an unusually exceptional player called Shaun.

The ex-army contestant – who revealed he’d had a thrilling career doing trooping the colour before becoming a dental hygienist and moving to the Shetland Isles – was far and away the best performing out of his team in the cash builder round.

Shaun managed to rack up an impressive £10,000 in the round already leaving presenter Bradley Walsh lost for words when the game to an end, but the competition continued to heat up.

Taking his impressive win to the table to face chaser Anne Hegerty, also known as The Governess, Shaun took his teammates’ advice on board.

Deciding to go for the higher offer of £43,000, Shaun’s move elicited a collective gasp from the audience and it seemed the player was going to smash the chaser all the way back home.

But while he raced down the board at first, two questions caught him out.

One question was about an animated film character, and the final nail in the coffin was when Shaun was faced with a tricky piece of music trivia.

Asked who was the only female singer to get in the UK top ten songs of all time, Shaun wrongly assumed Olivia Newton John couldn’t have won with her 80s fitness hit Physical.

Instead, the contestant confidently chose Madonna, and was cruelly knocked out of the game, leaving the presenter and his team crestfallen. 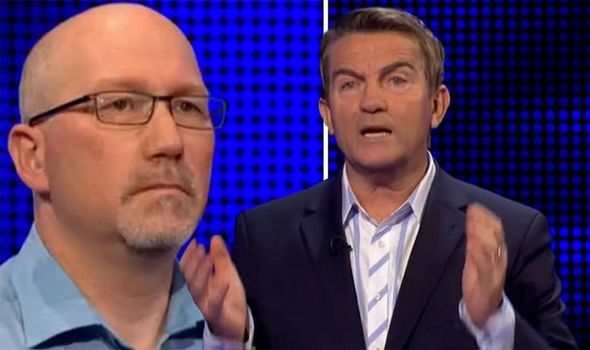 “Can’t believe it absolutely devastated for Shaun,” one person exclaimed.

While a fourth commented: “The team must be gutted to lose Shaun! #thechase.”

A fifth admitted: “Wow, unlucky John. Even I thought it was in the bag. #TheChase.”

“That question was brutal! Harsh way to go #TheChase,” a sixth said.

One person posted: “I’m genuinely p****d he didn’t get through. At least he tried. #thechase.”

And another fan added: “Never been so gutted for a player to get caught #TheChase.”

Despite the disappointing result, Bradley asked the player if he had any regrets, and Shaun retained his dignity ahead of his exit.

“No none whatsoever,” he insisted, and despite the rest of the team’s valiant efforts, particularly Jack who racked up 15 correct answers in the final chase, Anne Hegerty was simply too good to beat in today’s episode.

The Chase continues weekdays at 5pm on ITV.