Disney has always had a song in its heart, but the Mouse House finds the rhythm in its feet with Us Again, which marks Walt Disney Animation’s first theatrical short in five years. After premiering on the same bill as Raya and the Last Dragon, the short is now streaming on Disney+ and is guaranteed to be one of the most delightful things you see this year.

Us Again hails from Zach Parrish, who was head of animation on Big Hero 6 and director of the Short Circuits standout, “Puddles.” It’s set in a world not so different from ours, aside from the fact that everybody dances their way through life — except Art, an elderly man who’s resigned himself to his Barcalounger. Until, that is, one magical night during which he and his young-at-heart wife are able to turn back time and get back in sync.

To bring the short to life, Parrish partnered with Keone and Mari Madrid, the married duo best known for their performances on World of Dance and work with the likes of Justin Bieber and Billie Eilish. Us Again is told entirety though their choreography, set to a funk and soul score by composer Pinar Toprak.

“I love ‘Rhapsody in Blue’ from Fantasia 2000, where the movement is the emotion is the dialogue is the music. It starts to feel like one thing. We always wanted Us Again to feel that way,” Parrish told ET on a recent Zoom call.

You’ve talked about how you were pondering some of those bigger questions about life and aging, as one does, but at what point did you realize, “Oh, this could be a Disney short”?

Zach Parrish: I don’t know if I ever thought about it in terms of, “This could be a Disney short.” I had been pondering it for quite a long time. Actually, I remember telling [Raya director] Don Hall about it. We went out to lunch, and I told him about it maybe a year before I actually got this opportunity. It was just something that I was milling around in my head, that I thought, “I want to tell this story about the fountain of youth, and I think dance could be really cool.” And he was like, “Seems like a cool idea. You should think about it more.” So, when it came time to pitch, it was one of four ideas that I felt carried water — not to use that metaphor too literally. It was an idea and a perspective that I felt was personal to me, was personal to my story and to my family’s story, and I realized it was a very universal experience. We all age. And I thought that could be kind of magical.

This is set in a world of dancing, where everyone goes around their day with a shimmy and a shuffle. Where did the idea of this world of dance come from?

I always wanted it to be about dance. Basketball is an activity that I enjoy that has changed as I’ve gotten older. My knees are starting to go and things like that. I’m not quite as limber or strong as I used to be. That was the initial seed of the idea. That was that realization of, “Oh, I’m starting to age.” But from the beginning, the original idea was once they became young, they went dancing. It was really as I started exploring Art as a character and thinking about why he is the way he is, and he’s very representative of one of my grandparents, who was much more sedentary in his life. Especially in the United States, we tend to other older people, and tell them, “Here’s where you’re supposed to be. Here’s what you’re supposed to do.” And I thought exaggerating the entire world, making it all feel younger, bigger, broader would really divide Art away from that world even further.

Disney has animated dance sequences before, but this is a whole nother level. The very language of the movie is dance. Can you walk me through working with Keone and Mari to create the choreography, and then translating that in the animation process?

They’re an amazing couple. I never thought I’d actually get to work with them, but they were always the example that I used, as far as they are both great storytellers — they’re super emotional — but also, they have this very quick and staccato style of motion that felt like animation to me. It already felt like exaggerated animation, so stylistically, it fit. Working with them, we brought them in really early on, just to talk about this idea of a world of dance, what does that look like? What can we do? What can we not do? Which there wasn’t anything. They basically said, “You can do anything. We’ll figure it out.” We had them along the way, as we were developing the characters, thinking about the story.

And then once it got to a place where we had the story, we had to send it off to Pinar, she did kind of the final-ish score, and then I would kind of kick them off with a video where I would walk them through each scene and talk about what the characters were saying to one another, because we wanted the dance to represent the dialogue that they were using. I would talk through the conversation they’re having, and then they would send us back videos of like, “Here’s what we’re thinking.” We went back and forth on that and then we did a reference shoot, and the animators would use that reference to try to get all the detail, because Keone and Mari are so detailed in what they do. There’s finger movements. There’s very small, subtle movements that they do that the animators really combed over. So many times, we’d be in animation dailies, and I’d be like, “Can you pull the reference back up?” And we would look at it again and go, “See that? There’s, like, this head thing that happens on this note, and you need to make sure that that happens.” We tried to be as true as we could to really make it feel like Keone and Mari. 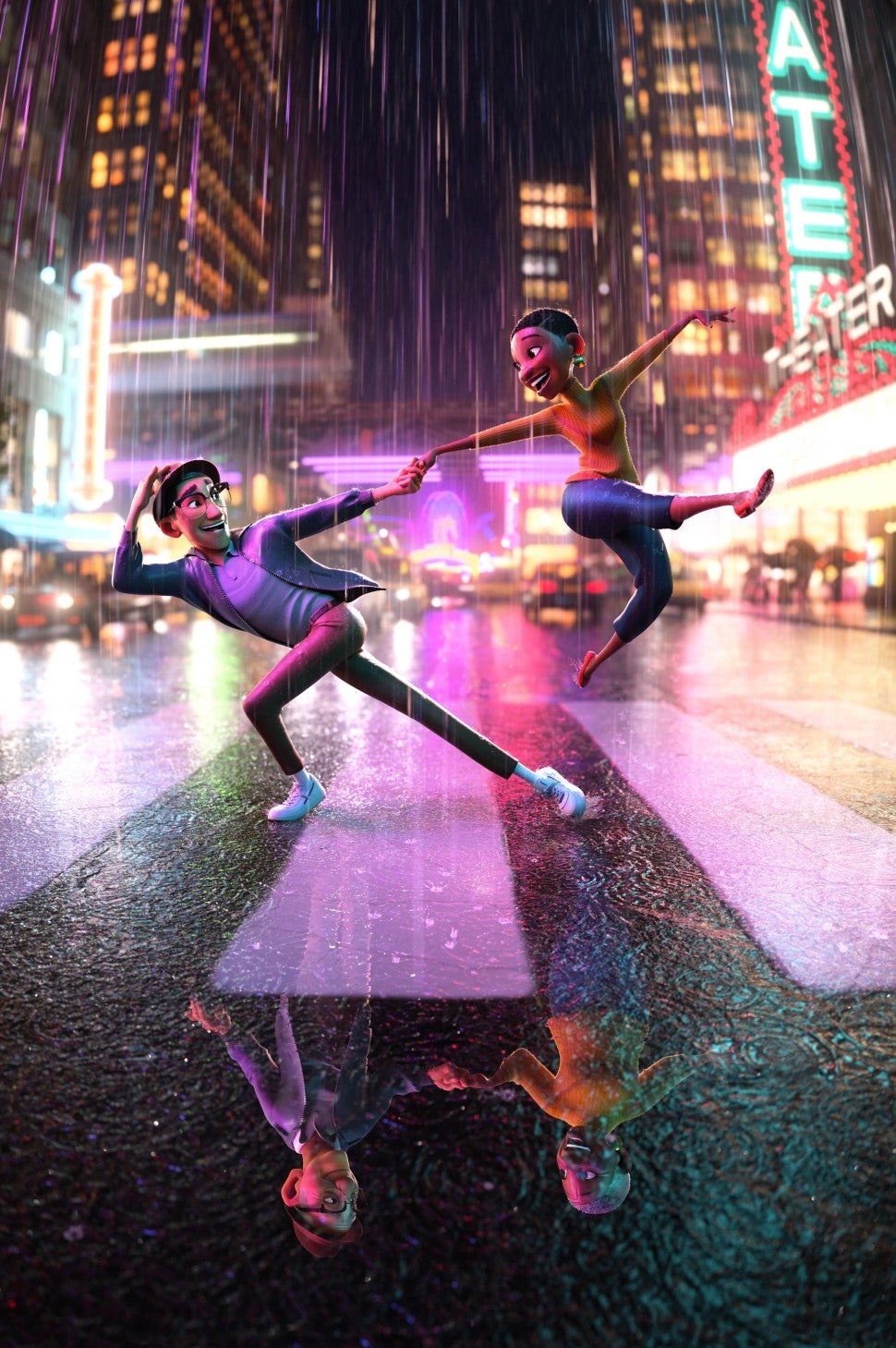 When did you find out you would be paired with Raya?

We just found out, I don’t even know, maybe a week or so before it was announced! It was very recent. I was so excited. I’m excited to get it out. With the pandemic and everything that’s been happening, we finished this film in July of last year, so we’ve been sitting on it for a little while. Obviously, times are still a little weird, so it’s just great to be able to put something out there that has this life-affirming message and brings people joy in this moment of weirdness.

They’re a good fit too. Raya makes history with its princess, and Us Again also continues Disney’s push for greater diversity in its leads. Why was that important for you?

It was in there from the very beginning. I always wanted it to be an interracial couple. I’m in an interracial couple — my wife is Japanese American — and so that’s why Art is Japanese American. Also, we knew that we were making a story about aging, and in many ways, older people are also underrepresented onscreen. So, we wanted to make sure that we were representing as many underrepresented groups as possible, and the specific pairing of Art and Dot is also the least represented interracial couple. That was important. But it was equally important to us to have people in the room who reflected the characters that we had onscreen, so that was a huge commitment for us and for the studio as a whole. We have a whole group of people, our Diversity & Inclusion Team within Disney, who we brought through the entire process to make sure that this guy was doing it as authentically as humanly possible.

I really found this world and the characters so magical. Do you think there’s a life for Us Again beyond the short? Have you brainstormed ideas of how it could be expanded to a feature?

I don’t know. I never thought about this as like, “Ooh, I’m going to tell a little piece of a big story.” I really wanted to tell a full emotional arc for these characters. I think the world of Us Again is such a lovely place. It’s a place that I would love to visit again. I think Art and Dot are such lovely characters, and it’s why we did the credits the way we did, we wanted to imply the continuation of this story and to see the impact of that change. But no, I haven’t given a ton of thought to a feature about that, specifically. I have lots of ideas, but I haven’t necessarily worked out an Us Again feature yet.

Let’s do some like pie-in-the-sky dream-casting. Who is voicing Art and Dot in a feature?

Oh my gosh. I’ve never thought about it! Do you make them young and old again? Because then you’re talking four different cast members. Man, I’m going to have to give that some thought. I might have to get back to you on that one.

My pitch for you is Viola Davis as Dot with George Takei as Art.

Ooh. I think that would work. George Takei has such a smoothness to his voice, a coolness that I think could work especially well. And I think he could do a gravelly grumpy dude. That’s actually really good. Done. We solved it. You’re good at this. You’re hired.

Us Again is now streaming exclusively on Disney+.