Occasionally, a TV show comes along and leaves a lasting impression on culture as we know it. We’re talking “Friends,” “The Office,” “Game of Thrones” and “Buffy the Vampire Slayer.” In “Buffy” — which premiered in 1997 — Sarah Michelle Gellar plays the titular heroine fated to battle vampires, while also navigating the trials of high school, alongside her sidekicks Willow (Alyson Hanigan) and Xander (Nicholas Brendon). Naturally, the vampires get even less screen time than Buffy’s teenage problems, which include her feelings for the tortured vampire with a soul, Angel (David Boreanaz).

Though creator Joss Whedon paired Buffy up with the hunky bloodsucker for the show’s first few seasons, the blond slayer also finds love with another vampire named Spike in later episodes. Both love interests sparked a war among fans, as viewers shipped Buffy with either Spike or Angel. Politician Stacey Abrams (who knows a thing or two about romance!) even waded into the fray by expressing her Twitter opinion that Spike was the right partner for Buffy as she embraced her powers.

Of course, Spike was only introduced as a love interest for Buffy after Angel left the show in Season 3, despite the fact that Angel still continued to crop up from time to time in the Buffy-verse. But why did he leave in the first place?

David Boreanaz's character got a spin-off 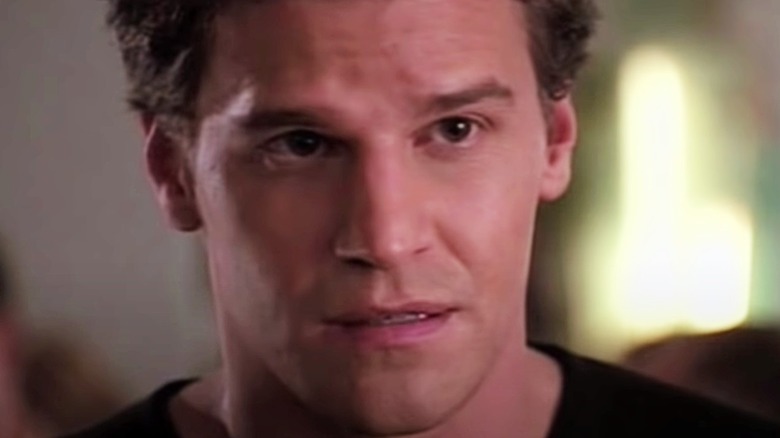 After David Boreanaz left “Buffy the Vampire Slayer,” he went on to star as the eponymous antihero of the spin-off show “Angel,” according to Screen Rant. Per the outlet, “Angel” was another one of Joss Whedon’s creations — and once the director realized that everyone’s favorite vampire “could carry an entire series by himself,” he wasted no time in writing Angel out of town in order for Boreanaz to star in his own show. But it wasn’t until Season 2 that Whedon viewed Angel as more than just Buffy’s love interest. Around this time, Angel briefly lost his soul and succumbed to violence, giving Boreanaz the opportunity to “show his range as an actor with a completely different side of the character” (via Screen Rant).

Like the show that sired it, “Angel” explored dark, gritty themes as Angel worked towards redemption. “It was extremely transitionally interesting for me,” Boreanaz told Entertainment Weekly in 2017 of filming the spin-off. “It was an opportunity to take this character into an adult-oriented show, which was unlike the Buffy-verse and more or less towards the lost souls in the city.” Decades later, the actor is still a staple on Network TV, where he currently appears in the CBS military drama “SEAL Team” (via Cheat Sheet). While it’s a stretch to attribute Boreanaz’s success wholly to his breakout role in “Angel,” having his own show is certainly a contributing factor.