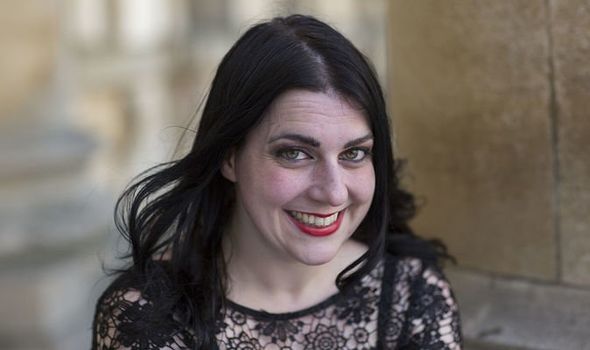 Joining the show for the first time, the popular presenter was so thrilled she phoned her mother after seeing the haul assembled by collectors Hamilton White and Carl Cookson, which included a sword and helmet from the Crusades and ancient cauldron chain.

She said: “The only way I can describe it to you is that I came out of my first day filming with Hamilton’s collection and I was on the phone to my mum. I was just shaking on the phone, going ‘I can’t even begin to explain to you what I’ve just done today’ because I’m an art historian.

“Because I’m on television I’ve handled objects that others haven’t had the chance to, I’ve handled the Sutton Hoo treasures, I’ve handled medieval artworks and every time it’s in a museum environment you hold it for just a few seconds with gloves, then you hand it straight back.

“What is so extraordinary about handling Hamilton’s work is the generosity of him, he will just hand them to you. There are ancient artefacts that go back hundreds of years, medieval art just lying in boxes, and then he’ll pull something amazing out of the boxes and say, “Hold it, touch it!” It’s incredible.”

But Ramirez admitted to “scepticism” about the haul when she first saw it.

She said: “It was an extraordinary experience. But I was like, ‘These can’t be the real deal… if they were we would all know about them they would be in museums’.

“But I am also a scholar. I know the truth about artefacts and what happens to them, and the truth is for every beautiful artefact in a museum there’s probably 50, 60 similar things in private collections, stately homes, vaults in banks.

“What Hamilton’s doing is he’s sharing them with everyone. When I asked, ‘Should they be in a museum? he said, ‘Well, maybe they will one day’. He certainly recognises the historic value.”