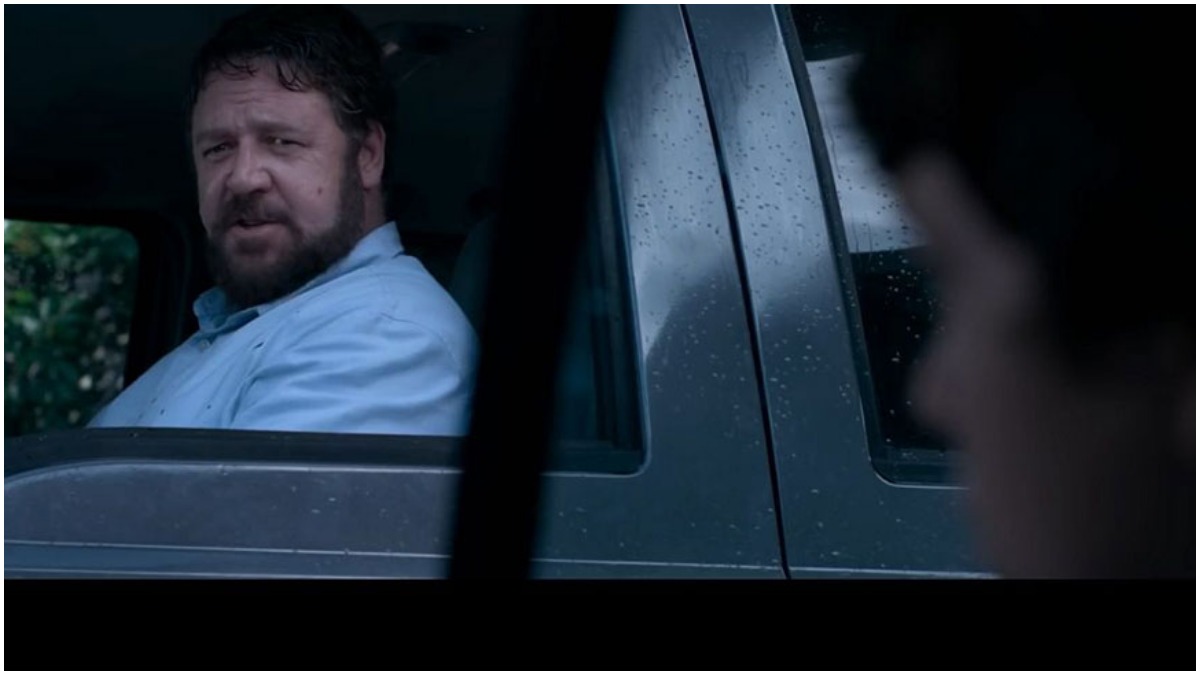 Movie theaters are reopening this weekend for the first time since the coronavirus pandemic shut down Hollywood and halted new releases for almost five months.

The first big blockbuster that they hope will lure back fans on opening weekend is Unhinged, a film that has Russell Crowe as one of the leads.

But is the movie worth heading out to theaters for as they reopen? Here’s our verdict…

Unhinged was supposed to hit theaters earlier this summer, but was delayed — and is now the biggest blockbuster being shown as they reopen this weekend.

The movie has a major star in Russell Crowe and initially looked like it was going to be a giant action-adventure movie, almost like something Liam Neeson would star in.

However, what it actually is is a horror movie with Russell Crowe playing a monster as relentless as Michael Myers.

The film doesn’t hide this fact, as the opening scene shows just what kind of person Tom Cooper is.

It starts with him outside a house at night in the rain. He takes off his wedding ring, brandishes a weapon, breaks into the house, kills the people in there, and then burns it down.

It turns out that Tom just killed his ex-wife and her new man and now the police are hunting him. However, before they even get close to catching him, he ends up with a case of road rage.

Transition to a mother named Rachel (Caren Pistorius) who is not having a great life right now. She is getting divorced, is having financial problems, and is shown to have become a little disorganized since the divorce started.

She is late getting up, which costs her a major client and also causes her son to end up in detention for his third tardy — all of which are her fault. Frustrated after getting stuck in traffic, she ends up behind Tom at a green light and lays on her horn.

Finally, she speeds around him and takes off. Tom catches up with her and pulls up beside her. He demands an apology, and she lets him know what he can do with his apology.

This was the worst mistake she made in her life.

The rest of the movie sees Tom Cooper do everything he can to destroy her life. It starts with him following her and hitting her car over and over. Just when she thinks she escaped and stops for gas, she sees he found her.

She makes an escape, but he kills a man who tried to protect her, and that is the start of this deadly game. When she realizes her phone is gone (Tom stole it from her car while she was in the gas station), Rachel realizes that everyone she loves and cares about is in danger.

Especially when Tom sees her “problems” involve getting divorced and sees a bit of his ex-wife in Rachel — just another woman trying to ruin a man’s life.

First up, despite an Oscar-winning actor in Russell Crowe in the lead as the bad guy, this movie is nothing more than a dumb, mindless, action horror movie.

There are some grisly deaths, but the movie never bothers to show any outcomes, as each dead body is just another step in what is a paint-by-numbers battle between Tom and Rachel.

The acting is fine, and Crowe is almost unrecognizable with at least 50 pounds or more added around his waste. Pistorius is also good as the woman on the run. However, her acting earlier in the movie made her almost impossible to side with until the murders started.

She never deserved what happened to her, but she did deserve a lesson in how to treat other people. She just chose the wrong day to be a jerk to someone on the streets.

If you want a smart horror movie, look for whatever Jordan Peele might be making next. The biggest problem with this movie might be the title sequence.

As the players’ names pop up on the screen, there are news clippings and news reports about road rage incidents. There are more about people losing it and attacking others. There are even more about how people aren’t taking it anymore.

That isn’t this movie. This is a movie about a guy who kills his ex-wife for leaving him and then decides to ruin the life of the next woman he sees.

The worst moment was where he decided to try to kill Rache’s son, Kyle (Gabriel Bateman). Tom tried to talk to the boy earlier in the movie, but by the end, the child was just another way to ruin Rachel’s life. The movie just wouldn’t stop.

There is nothing new in this movie, and there is nothing original in the effort. This is a movie about a man who is having a really bad day who decides that he will take his aggression out on the world.

If you want a dumb action movie that has some gruesome deaths and Russell Crowe in his best psycho mode, Unhinged might be a decent one for you.

If you are looking for something a little more dramatic at theaters this weekend, check out our review for Words on Bathroom Walls.

Unhinged opened in theaters on August 21 and is currently showing nationwide.