[Light spoilers ahead for this season of The Handmaid’s Tale. If you’re not caught up, you’re not going to be seriously spoiled by anything below, but proceed with caution.]

The third season of The Handmaid’s Tale is almost over, and if you were hoping the dystopian world of Gilead would have started to make any kind of sense by now, you’re… not in luck.

Aside from being just a generally sh*tty place to live, there are some things about Gilead that simply aren’t logical, just fundamentally. Not on a “women are being systematically raped” level, because obviously that isn’t rational, but on more granular level. After all this time, here’s what we’re still grappling with.

No one in Gilead has a Boston accent.

Not a single one. This was pointed out most recently on Twitter.

And it’s a totally valid point. The show mainly takes place in the greater Boston area. Yet not a single person has even a tinge of this happening…

Someone in the replies on that tweet pointed out that a lot of the commanders and higher-up Gilead people might not actually be from that area originally, which is possible, but June for sure is.

On Reddit earlier this year, someone pointed out that none of the women in Gilead wear glasses. It’s not that noticeable until you see Emily’s flashback scenes, where she’s wearing glasses. 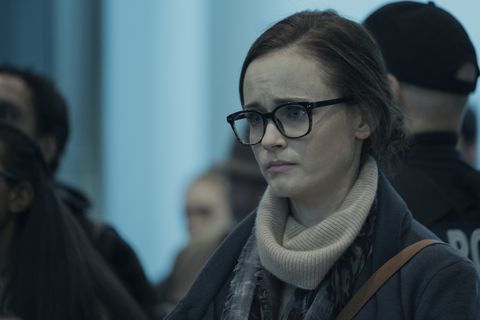 It begs the question… does she just not need them anymore? Does Gilead issue all women contacts? Highly unlikely, considering they’re pretty old school about everything.

In that Reddit thread, people proposed that because women in that society aren’t supposed to read, they don’t need glasses. The issue is that people who wear glasses don’t *just* need them for, like, general life things.

The handmaids who wear rings in their mouths might universally be on a juice cleanse.

As discussed earlier this season, D.C. handmaids wear rings to keep their mouths shut and prevent them from talking. But, like, how do they eat? Unless the rings come out, they must be on a liquid diet, which doesn’t make sense because they’re literally being bulked up for pregnancy.

None of the commanders drive themselves anywhere.

Don’t you miss, like, driving yourself to the store? IDK.