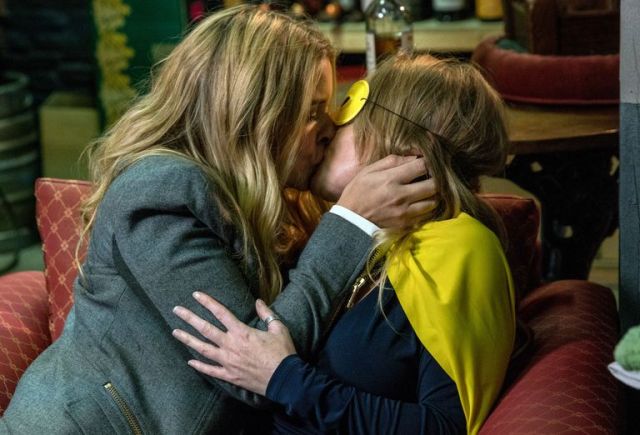 I am already prepared for the hate I might get for even suggesting this as many Emmerdale fans will disagree with the prospect that Vanessa Woodfield (Michelle Hardwick) and Charity Dingle (Emma Atkins) should split.

I am also hopeful I might also get some backup as many agree that Vanessa deserves better; it’s an issue that has divided the Vanity fandom, a loyal collection of supporters of the relationship who have been tortured by scenes of Charity constantly messing up and pushing the love of her life away.

There’s no denying that there is a deep love between the two characters but is that enough to salvage what is now a damaged and toxic relationship? This fan says no.

I say it with a heavy heart as Emmerdale did such a good job in pairing these two up. What started as a mischievous bunk up in the Woolie cellar, quickly became something much deeper and meaningful.

Charity’s character development as she struggled with the almost alien feeling of being in love was a joy to watch and added huge layers to her, keeping her fresh after so many years of scheming, on/off Cain passions and impeccable impressions of Chrissie White. Never forget.

It also breathed new life into Vanessa who became a bit of an anchor for Charity but was also partially infected by Charity’s more reckless side. They actually had fun, something which many couples miss out on in their relationships, lurching from one crisis to the next.

One thing that Vanessa values more than anything else is honesty and, at first, it was a concept lost on Charity as she thought Vanessa would push her away if she was truthful about her flaws and her actions.

They seemed to iron this out (to an extent) and Vanessa forgave it; leading to a new understanding between the pair. They were at their strongest they had ever been and the future was bright.

So what went wrong? Two words: Mack Boyd (Lawrence Robb). Relationships often have an antagonist who comes between them and it would have been lovely to see Charity stop at the banterous exchange and then tell Mack where to go – she has seen men like him before.

Instead, disappointingly, a kiss was shared, leaving Vanessa heartbroken by the betrayal when she eventually found out.

This is a couple who were served so well by a bonkers proposal, a heartwarming gesture for Charity to adopt Johnny, a genuinely intense moment which saw Charity more terrified than she has ever been that she would lose Vanessa after a stabbing and some well scripted reassurance from Vanessa that Charity is a good mum.

And despite her many mistakes, it was true. She was making huge steps with Sarah and Noah, due to Vanessa’s influence and the family unit that was set up.

She had come through the bravest ordeal of her life as she stood up to DI Bails and exposed him as an abuser and rapist, with Vanessa proudly by her side.

The couple defeated obstacles, bickered, shared passion, good humour and stood by one another so a random kiss with Mack was pretty incomprehensible.

This needn’t have been the end. I deeply feel that a hurt Vanessa would have eventually forgiven this. But the crushing part that sealed the end was the web of lies.

Charity hid her misdemeanor and thus the trust that Vanessa held onto with such importance was broken.

The couple needned time apart and this facilitated Michelle’s maternity leave from the show.

There were ample stories that Charity could have been given – with Sarah and Noah; with having Johnny for visits, with helping Chas through the pub troubles and yes, with scheming. A double act with Mack wouldn’t have been the end of the world if the only benefits they were getting from one another was financial.

But no; since Vanessa left, Charity has entered into an array of sexual encounters with Mack, constantly repeating the thing which destroyed the relationship in the first place.

In the real world, Charity would hold some loathing and disgust with Mack. She is a woman who can hold quite the grudge. It takes two to tango and she would surely resent his part in wrecking her family. She had everything she could never have dreamed in a million years was possible due to her background.

But it’s gone too far now and it would make zero sense for Vanessa to return and forgive all of this.

A couple can’t forget this and act like they were before; the dynamic has irreversibly changed and this is not the Vanity that fans want.

Bluntly, Vanessa deserves better and it would be preferable to see her move on with her life while an arc for Charity could show her seeing what she has lost and having some sort of epiphany.

I don’t want a fan servicing return for Vanessa with an all is forgiven embrace and a kiss and a week of soul searching before the whole Mack thing is brushed under the carpet.

The damage is done so the hope for me is that Vanessa’s return will focus on herself, her sister Tracy and any interactions with Charity could eventually be friendship; but even that would take a lot of healing.

For me, it’s RIP Vanity. A sad realisation but an inevitable one.